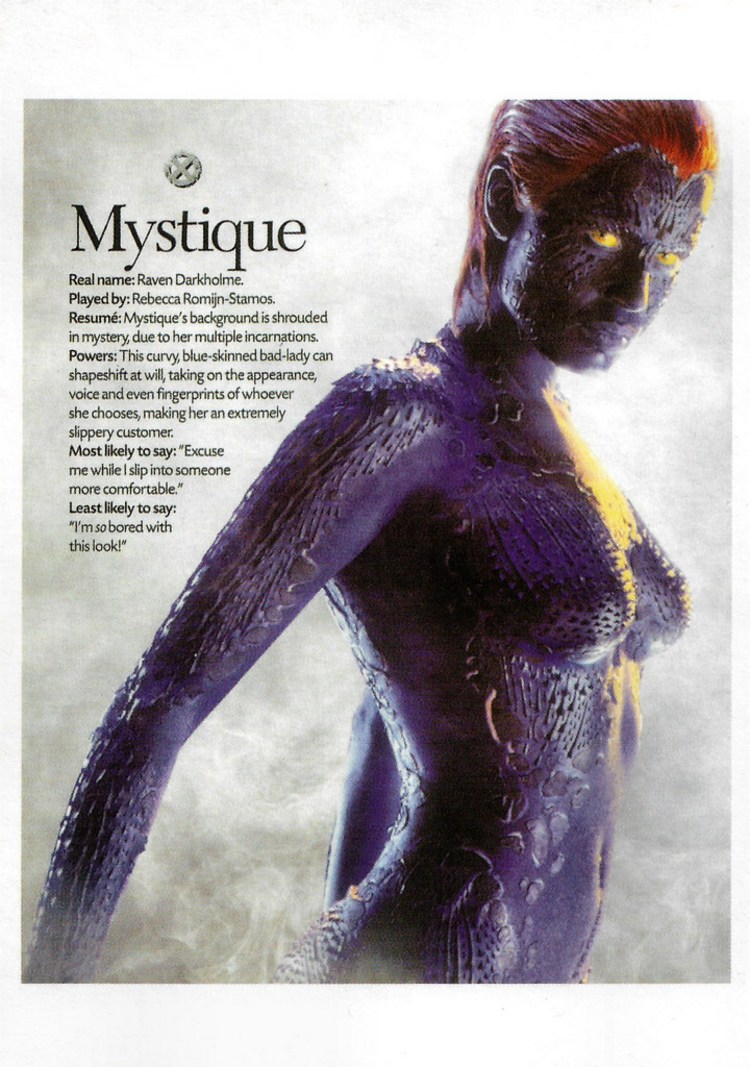 British postcard by Memory Card, no. 669. Photo: Rebecca Romijn-Stamos as Mystique in the superhero film X-Men (Bryan Singer, 2000). Rebecca Romijn (1972) or Rebecca Romijn-Stamos is an actress and former supermodel. She is best-known as 'Mystique' in the X-Men franchise. Rebecca Alie Romijn was born in 1971 in Berkeley, California to Jaap Romijn and Elizabeth Kuizenga. Her Dutch-born father was a custom furniture maker; her mother an English teacher. While studying music (voice) at the University of California, Santa Cruz, Rebecca became involved with modeling. Eventually, she moved to Paris, France for more than three years. She has also walked for Giorgio Armani, Sonia Rykiel, and Anna Molinari. She modeled for Tommy Hilfiger, Christian Dior, and Victoria's Secret. Romijn appeared on the covers of Elle, Marie Claire, Cosmopolitan, Allure, Glamour, GQ, and Esquire, and she posed for the swimsuit issue of Sports Illustrated. She also was the host of MTV's House of Style from 1998 to 2000. In 1994, she met actor and musician John Stamos at a Victoria's Secret fashion show in which she was modeling. In 1998, they married. During their marriage, she used the name Rebecca Romijn-Stamos in both her personal and professional life. She had her first, small film parts in the comedies Dirty Work (Bob Seget, 1998), and Austin Powers: The Spy Who Shagged Me (Jay Roach, 1999). The latter is the second installment in the Austin Powers film series, starring Mike Myers as Austin Powers, Dr. Evil and Fat Bastard. In X-Men (Bryan Singer, 2000), Rebbecca Romijn Stamos had her first major film role as 'Mystique'/Raven Darkholme. It was based on the comic that Jack Kirby and Stan Lee created in 1962. She returned to the role in the sequel X2: X-Men United (Bryan Singer, 2003), and X-Men 3 (2006). In these films, her costume consisted of blue makeup and some strategically placed prosthetics on her otherwise nude body. The role has since been recast with Jennifer Lawrence playing the younger version of the character. Rebecca Romijn had her first leading role opposite Antonio Banderas in the erotic thriller Femme Fatale (Brian De Palma, 2002). In fact, she played the dual roles of Laure Ash and Lily Watts. The film was a box office disappointment but has subsequently become a cult film and was successful in video rentals. She also starred in films such as the Science-Fiction film Rollerball (John McTiernan, 2002) and the Canadian-American horror drama-thriller Godsend (Nick Hamm, 2004) with Greg Kinnear and Robert De Niro. In 2004, she also played Joan opposite Thomas Jane and John Travolta in The Punisher (Jonathan Hensleigh, 2004) which is based on the Marvel comic-book of the same name. In 2005, she and John Stamos divorced and she returned to using her birth name. In January 2007, Rebecca Romijn made her first appearance on the TV series Ugly Betty as a full-time regular cast member. She played Alexis Meade, a transgender woman and the sister of lead character Daniel Meade. She was five months pregnant with twins Dolly and Charlie when she completed filming on Ugly Betty (2006). Father was actor Jerry Connell, whom she married in 2007. Romijn also starred in the TV series Eastwick (2009). In 2011, she appeared in an uncredited cameo in X-Men: First Class (Matthew Vaughn, 2011), appearing as an older version of Mystique played by Jennifer Lawrence. Romijn also appeared as lab worker Jessie on the TV show NTSF:SD:SUV:: for two seasons and as Michelle Maxwell, a former Secret Service agent who works as a private investigator in the TV series King & Maxwell. In addition to her film ventures, Romijn has also recorded music, performing a cover of Prince's 'Darling Nikki' for the album 'Electro Goth Tribute to Prince' (2005). She starred as Eve Baird, the guardian of the eponymous group in The Librarians, a direct spin-off of The Librarian film series. She also hosted the reality show Skin Wars and was a recurring character in the second season of Star Trek: Discovery (2019), playing the role of Number One, first officer of the USS Enterprise. In the cinema, she starred in the horror-comedy Satanic Panic (Chelsea Stardust, 2019). Rebecca Romijn and Jerry Connell are still together. Recently, they voiced four animated superhero films, The Death of Superman (Sam Liu, James Tucker, 2018), Batman: Hush (Justin Copeland, 2019), Reign of the Supermen (Sam Liu, 2019) and, Justice League Dark: Apokolips War (Matt Peters, Christina Sotta, 2020). Connell as Clark Kent / Superman and Romijn as Lois Lane. Sources: Biography.tkosau, Wikipedia, and IMDb. And, please check out our blog European Film Star Postcards.

This Sports Illustrated Swimsuit 2021 - rebecca-romijn-stamos-in-x-men-2000- on net.photos image has 720x1024 pixels (original) and is uploaded to . The image size is 251792 byte. If you have a problem about intellectual property, child pornography or immature images with any of these pictures, please send report email to a webmaster at , to remove it from web.