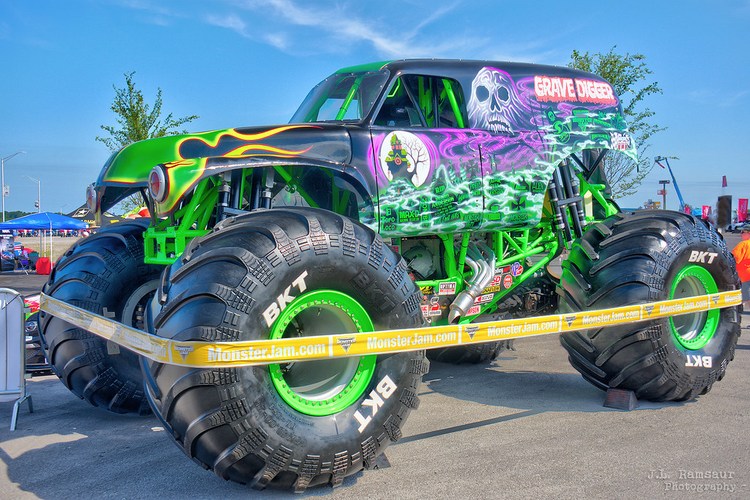 Dennis Anderson came up with the concept for Grave Digger® back in 1981. Originally built out of an old 1951 Chevy Panel Wagon and parts that he scrounged from junkyards, Grave Digger as of today has grown by leaps and bounds. No longer do the trademark red headlights come off of old school buses, and the paint job has changed from a dull orange to the famous green and black flame motif we see today. Grave Digger is one of the most decorated Monster Jam® trucks in the world and Anderson has won four Monster Jam World Finals® championships, capturing the racing title in 2004 & 2006, and the freestyle title in 2010 & 2000 as well as many other awards and accomplishments. The Grave Digger team that currently competes at Monster Jam includes Adam Anderson, Carl Van Horn, Charlie Pauken, Jon Zimmer, Pablo Huffaker, Randy Brown, and Morgan Kane in addition to Anderson. This image of Grave Digger was taken at the NASCAR Cup Series Ally 400 at the Nashville Superspeedway. It was on-site as cross promotion with Kevin Harvick's #4 Stewart/Haas Ford Mustang that was painted identically to the famous monster truck as a surprise gift from his kids. Three bracketed photos were taken with a handheld Nikon D7200 and combined with Photomatix Pro to create this HDR image. Additional adjustments were made in Photoshop CS6. "For I know the plans I have for you", declares the LORD, "plans to prosper you and not to harm you, plans to give you hope and a future." ~Jeremiah 29:11 The best way to view my photostream is through Flickriver with the link below: www.flickriver.com/photos/photojourney57/

This Sports Illustrated Kids - the-grave-digger-ally-400-nashville-superspeedway on net.photos image has 1024x683 pixels (original) and is uploaded to . The image size is 357685 byte. If you have a problem about intellectual property, child pornography or immature images with any of these pictures, please send report email to a webmaster at , to remove it from web.