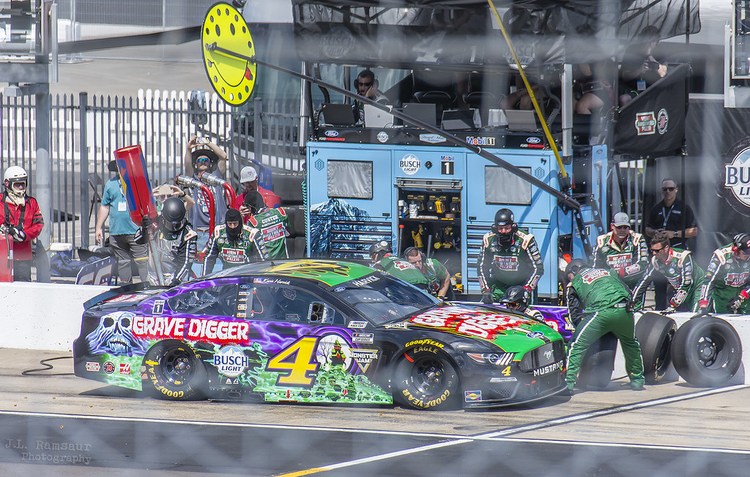 Surprise gift for Kevin Harvick on Father's Day weekend was this Grave Digger version of his #4 Stewart/Haas Ford Mustang that was selected by his kids Keelan & Piper. It is an exact paint scheme replica of the Monster Jam monster truck version made famous by Dennis Anderson. Kevin drove this can in the Ally 400 at Nashville Superspeedway and pushed it to a 5th place finish in the inaugural Cup Series race at this venue. Harvick has racked up numerous milestones throughout his 20+ year career including 2014 Cup Series Champion, 2001 & 2006 Xfinity/Busch Series Champion, 2002 IROC Series Champion, 2000 Xfinity/Busch Series Rookie of the Year, and 2001 Cup Series Rookie of the Year. Probably the most notable distinction and most unfortunate one is he was tabbed by Richard Childress to take over the #3 Chevrolet (renumbered to the #29) in 2001 after Dale Earnhardt passed away during the last lap of the Daytona 500 (the first race of that season). In just his 3rd race after filling that seat, Harvick won his first Cup Series race at Atlanta Motor Speedway. Technical Information (or Nerdy Stuff): Camera - Nikon D7200 (handheld) Lens – Nikkor 18-300mm Zoom ISO – 400 Aperture – f/6.3 Exposure – 1/1600 second Focal Length – 300mm The original RAW file was processed with Adobe Camera Raw and final adjustments were made with Photoshop CS6. "For I know the plans I have for you,” declares the LORD, “plans to prosper you and not to harm you, plans to give you hope and a future." ~Jeremiah 29:11 The best way to view my photostream is through Flickriver with the link below: www.flickriver.com/photos/photojourney57/

This Sports Illustrated Kids - 4-grave-digger-ford-mustang-kevin-harvick-ally-400-nashville-superspeedway on net.photos image has 1024x651 pixels (original) and is uploaded to . The image size is 321305 byte. If you have a problem about intellectual property, child pornography or immature images with any of these pictures, please send report email to a webmaster at , to remove it from web.