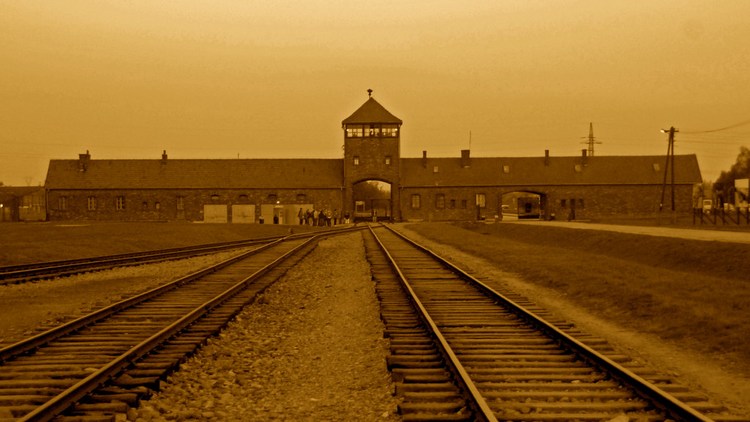 This image is disturbing and so is the place. It is a man-made Hell on Earth but it serves to remind us of man's inhumanity to man and the power we the people have in our own countries to keep people like Hitler assuming power. The victories of Operation Barbarossa in the summer and fall of 1941 against Hitler's new enemy, the Soviet Union, led to dramatic changes in Nazi anti-Jewish ideology and the profile of prisoners brought to Auschwitz. Construction on Auschwitz II-Birkenau began in October 1941 to ease congestion at the main camp. Reichsführer-SS Heinrich Himmler, head of the Schutzstaffel (SS), intended the camp to house 50,000 prisoners of war, who would be interned as forced laborers. Plans called for the expansion of the camp first to house 150,000 and eventually as many as 200,000 inmates. An initial contingent of 10,000 Soviet prisoners of war arrived at Auschwitz I in October 1941, but by March 1942 only 945 were still alive, and these were transferred to Birkenau, where most of them died from disease or starvation by May. By this time Hitler had decided to annihilate the Jewish people, so Birkenau was repurposed as a combination labor camp/extermination camp. The chief of construction of Auschwitz II-Birkenau was Karl Bischoff. Unlike his predecessor, he was a competent and dynamic bureaucrat who, in spite of the ongoing war, carried out the construction deemed necessary. The Birkenau camp, the four crematoria, a new reception building, and hundreds of other buildings were planned and constructed. Bischoff's plans called for each barrack to have an occupancy of 550 prisoners (one-third of the space allotted in other Nazi concentration camps). He later changed this to 744 prisoners per barrack. The SS designed the barracks not so much to house people as to destroy them. The first gas chamber at Birkenau was the "red house" (called Bunker 1 by SS staff), a brick cottage converted into a gassing facility by tearing out the inside and bricking up the windows. It was operational by March 1942. A second brick cottage, the "white house" or Bunker 2, was converted some weeks later. These structures were in use for mass killings until early 1943. Himmler visited the camp in person on July 17 and 18, 1942. He was given a demonstration of a mass killing using the gas chamber in Bunker 2 and toured the building site of the new IG Farben plant being constructed at the nearby town of Monowitz. In early 1943, the Nazis decided to increase greatly the gassing capacity of Birkenau. Crematorium II, which had been designed as a mortuary with morgues in the basement and ground-level incinerators, was converted into a killing factory by installing gas-tight doors, vents for the Zyklon B (a highly lethal cyanide-based pesticide) to be dropped into the chamber, and ventilation equipment to remove the gas thereafter. It went into operation in March. Crematorium III was built using the same design. Crematoria IV and V, designed from the start as gassing centers, were also constructed that spring. By June 1943, all four crematoria were operational. Most of the victims were killed using these four structures.

This Sports Basement - the-railway-lines-at-birkenau-concentration-camp-poland on net.photos image has 1024x576 pixels (original) and is uploaded to . The image size is 153781 byte. If you have a problem about intellectual property, child pornography or immature images with any of these pictures, please send report email to a webmaster at , to remove it from web.