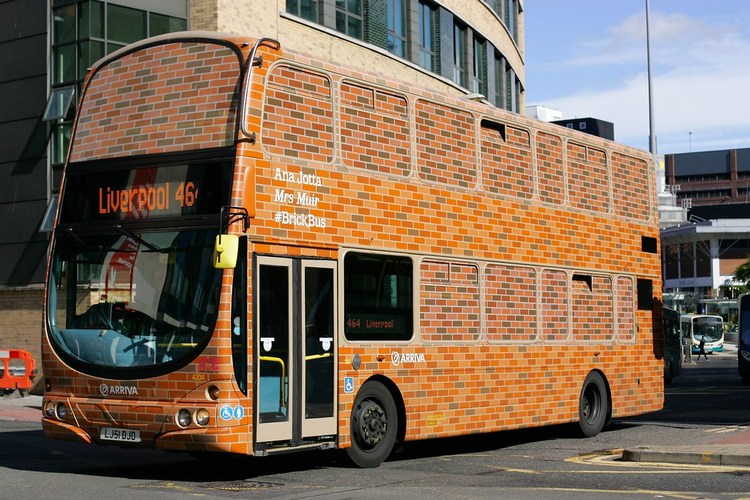 Arriva Merseyside Fleet number 4204 (LJ51DJO) is seen in an imaginative livery, please see related press information.......Three double-decker buses have been transformed by artists and children in a major new commission by Liverpool Biennial and Arriva North West. The buses can be seen driving on routes through the City Centre, South Liverpool, North Liverpool and the Wirral. Designed by Year 7 pupils from Childwall Sports & Science Academy, in collaboration with artists and designers Hato, a Space Bus called Hello Future Me contains coded messages to the future citizens of Liverpool, spelled out in an alphabet of newly invented symbols that draw inspiration from imagined futures. It pays homage to the tradition of sending messages into outer space, in the hope that extra-terrestrial beings will be able to understand more about human civilisation. The bus is part of the Children’s Episode. Ana Jotta’s bus is disguised as a huge, solid brick wall. The pattern is reminiscent of the brick buildings the artist saw when she came to Liverpool for the first time. Her bus is part of the Monuments from the Future episode. Frances Disley’s Blaze is inspired by the success story of Liverpool-born Eunice Huthart, the only contestant on 1990s TV action game-show Gladiators to become a ‘Gladiator’ herself. Blaze depicts the artist as a painted character with the power to blend into her own artwork.

This Sports Academy Near Me - the-brick-bus- on net.photos image has 1024x683 pixels (original) and is uploaded to . The image size is 229647 byte. If you have a problem about intellectual property, child pornography or immature images with any of these pictures, please send report email to a webmaster at , to remove it from web.