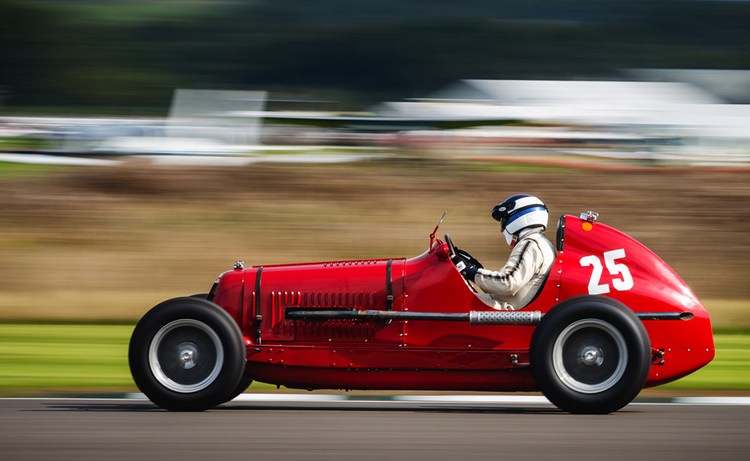 Another panning shot taken at Goodwood, this time of the rather nice looking Maserati Tipo 4CM 1500 (S/N 1527) of Simon Edwards. When the 4CM was first introduced in 1931, it used an 1100cc engine, and was Maserati's first racing car (although they use the word voiturette, meaning cart). Built alongside the 4CS two-seater sports-racer, the 4CM monoposto was powered by the aforementioned 1100cc twin-overhead-camshaft supercharged ‘four’ that produced 125bhp at 6,600rpm. Many of the cars were converted to 1500cc, this required new cylinder block, pistons, connecting rods and supercharger to be fitted but meant the cars top speed was raised to over 140mph. It is noted that one of the Maserati 4CM’s main characteristics was its braking system, with hydraulically operated brakes that provided better control of braking and thus improved the car’s racing performance. Apparently Maserati sold quite a few 4CM and 6CM cars in 1934 and 1935, but hit problems when Italy and the Ethopian Empire went to war with one another (known as the Second Italo-Ethiopian War, October 1935 to May 1936). ________________________________ Dave Adams Automotive Images

This Sports - simon-edwards-1935-maserati-4cm-at-the-2015-goodwood-revival-photo-1- on net.photos image has 1000x615 pixels (original) and is uploaded to . The image size is 135371 byte. If you have a problem about intellectual property, child pornography or immature images with any of these pictures, please send report email to a webmaster at , to remove it from web.