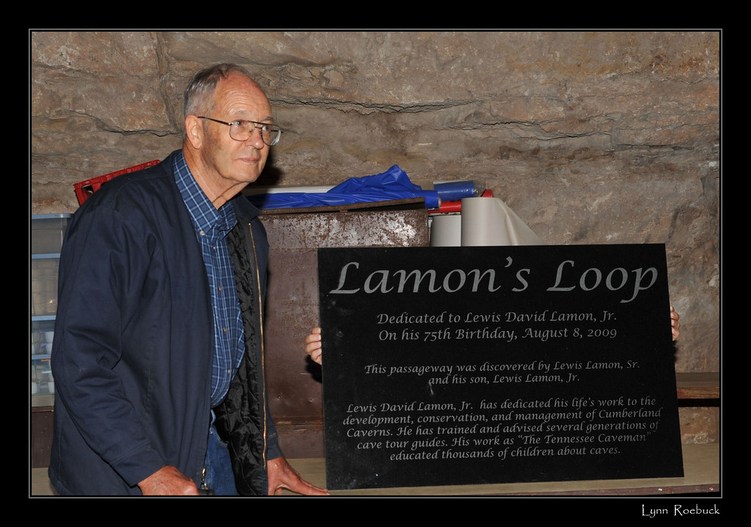 Happy Birthday! My Friend! Over the weekend many of us cavers helped our friend Lewis Lamon celebrate his 75th birthday.....underground, of course! The party was held in the Volcano Room of Cumberland Caverns. Cave manager Teddy Jones honored Lewie for his life’s work in Cumberland Caverns with this plaque "Lamon's Loop" which will remain at the cave, a small plaque was given to Lewie to take home The plaque: "Lamon's Loop Dedicated to Lewis David Lamon, Jr. On his 75th Birthday, August 8, 2009 This passageway was discovered by Lewis Lamon, Sr. and his son Lewis Lamon, Jr. Lewis David Lamon, Jr. has dedicated his life's work to the development, conservation, and management of Cumberland Caverns. He has trained and advised several generations of cave tour guides. His work as "The Tennessee Caveman" educated thousands of Children about caves." .......And Lewie makes the best ice cream in Tennessee!! ;-) NOTE: This is a Commercial Cave so is NOT closed due to White Nose Syndrome (WNS) by the State of Tennessee.

This Spencer Jones - the-birthday-boy on net.photos image has 1024x719 pixels (original) and is uploaded to . The image size is 184253 byte. If you have a problem about intellectual property, child pornography or immature images with any of these pictures, please send report email to a webmaster at , to remove it from web.