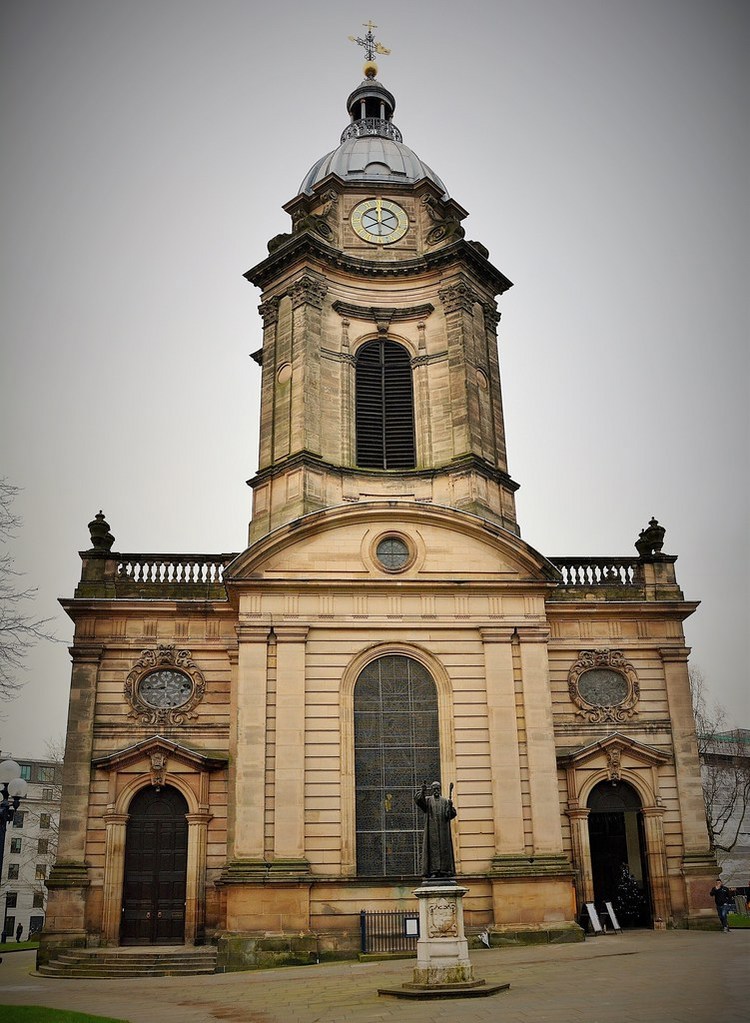 The Grade I Listed Cathedral Church of Saint Philip, in the city centre, Birmingham, West Midlands. St Philip's Church was planned when the nearby medieval church of St Martin in the Bull Ring became insufficient to house its congregation because of the growing population of Birmingham. The land, previously named The Barley Close, was donated by Robert Philips in 1710. It is one of the highest points in the district and is said to be at the same level as the cross on St Paul's Cathedral in London. Following an Act of Parliament, construction commenced in 1711, to the design of Thomas Archer, and was ready for consecration in 1715, when it was dedicated to the Apostle Philip as a tribute to the benefactor Robert Philips. It appears to have been Archer's first church, apart from a rebuilt chancel at Chicheley attributed to him. Construction was estimated to cost £20,000, but the final figure was only £5,012. (Equivalent to £680,000 in 2015). This was because many of the materials were donated and transported to the site at no cost. St Philip's served as a Parish church from 1715 to 1905. The church contained St. Philip's Parish Library which was bequeathed to the church by the Revd William Higgs. In 1792 a library room was constructed next to the parsonage house by the Revd Spencer Madan and was named the Parochial Library. With the growth of industrial towns in the 18th and 19th centuries, there was a consequent growth in the number of parishes, and a need for new administrative centres. Birmingham became a city in 1889. While the cities of Liverpool and Truro constructed new cathedrals, in a number of other cities existing churches and ancient abbeys were raised to the administrative status of cathedrals. Through the actions of the statesman Joseph Chamberlain and the Bishop of Worcester, Charles Gore, St Philip's became the Cathedral of Birmingham in 1905, with Charles Gore as its first bishop. During the Second World War, the cathedral was bombed and gutted on the 7 November 1940. It’s most significant treasures, several windows by Burne-Jones, had been removed in the early stages of the war by The Birmingham Civic Society, and were replaced, unharmed, when the building was restored in 1948.

This Spencer Jones - 21720 on net.photos image has 751x1024 pixels (original) and is uploaded to . The image size is 182149 byte. If you have a problem about intellectual property, child pornography or immature images with any of these pictures, please send report email to a webmaster at , to remove it from web.