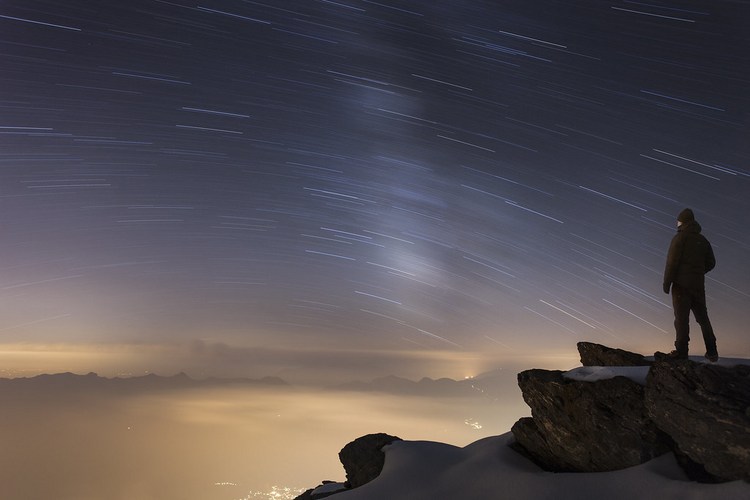 I Wonder as I Wander

Personal Website Facebook Shot taken at night on September 6th 2012, from the summit of Mount Rocciamelone (3.538 m), Italy. When I am in extreme places I often think of possible compositions showing the human awe toward the universe. Indeed something not easy to portray... because it's mostly intimate and conceptual... in other hand this opens the field to new ideas that are also often suggested by the same location and condition in which I am spending the night. That night I've thought "why not to introduce a human figure (in this case me) in a star trail?". Technically this requires a double exposure, because if the star trail, as in this case, takes half an hour, it is not humanly possible to stand still for so long... so, here we have a shorter exposure at high ISO for the human subject and its surroundings (stones, light pollution from the plain), which is mathematically proportional to a second 30 minutes exposure at lower ISO for the stars. As usual for this kind of shots: manual focusing, tripod, mirror lock up, timer, remote shutter release. The result is something much more important of the arid details written above, yes, it's what I was hoping for: a man who contemplates the cosmic movement. Specifically, the Milky Way trail of light (center image). As always, ideas are able to overcome physical and material limits :-) Being this taken ​​in the month of September, the Milky Way at the beginning of the night no longer points exactly towards the south, rather a bit more southwest. This excluded any possibility to have again the distant north face of Monte Viso aligned with the Great Rift sector, as in previous shots of mine taken in June. In any case, the mountain range in the distance belongs to the natural park Orsiera-Rocciavrè. Light pollution always comes from the city of Susa, which lies 3.000 meters below. _____________________ ©Roberto Bertero, All Rights Reserved. This image is not available for use on websites, blogs or other media without the explicit written permission of the photographer.

This Selfie Light Stand - i-wonder-as-i-wander on net.photos image has 1024x683 pixels (original) and is uploaded to . The image size is 98071 byte. If you have a problem about intellectual property, child pornography or immature images with any of these pictures, please send report email to a webmaster at , to remove it from web.