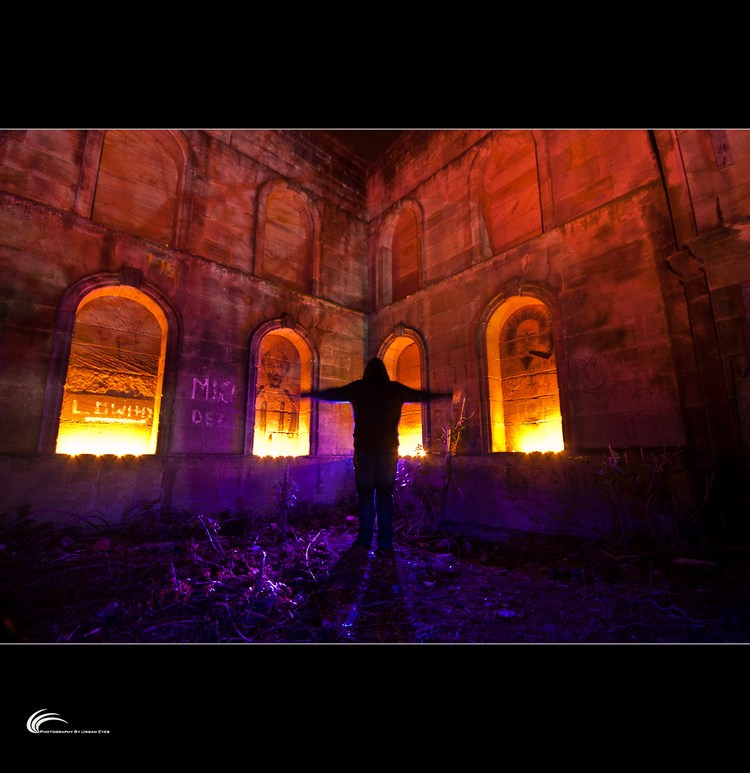 "In the dark depths, their faces beckoning me"

Inspired title from the Iron Maiden Song "Still Life", lyrics taken from the first verse. Also Inspired by a very freaky night out light painting with me jolly pals Paul, Phil & our mentor Mick Ridley in the Mausoleum! View On Black Well this one took some doing! I really liked the artwork on the wall and after lighting the arches with tea light candles I decided to try a moody selfie! Hey how hard could it be?! Very hard as you can see by the wobbly hands! I must practice standing still more often! Many thanks to Mick & Paul for lining me up and for operating the cameras! Used Mick's colourful torch to create the light in front of me to then create the shadow and flipper feet behind me! Then the chaps used the torches to shine through the bushes and small trees to create the shadows high on the walls! This really did feel like an endurance game, trying to stand still, not move, or laugh as we waited for the lights to do there magic! It's also kinda wierd looking at all the graffiti on the walls and also some of the upside down crosses, which some hold it to be a sign used by devil worshippers, so I have read but also: "The upside down cross is also regarded as the cross of st peter (who was crucified upside down). Although other people believe this to be a sign of someone who has lost faith. There are many cases where people believe poltergeist activity actually causes this type of behaviour from normal crosses, turning them at night!" Just what I needed to know when looking at these two guys on the wall! I'm sure one of them winked at me at one point! Honest! Anyhow I leave you with those thoughts! ~~~~~~~~~~~~~~~~~~~~~~ Iron Maiden ~ "Still Life" "In the dark depths, their faces beckoning me Can't you see them it's plain for all to see They were there, oh I know you don't believe me. Oh...I've never felt so strange But...I'm not going insane. I've no doubt that you think I'm off of my head You don't say, but it's in your eyes instead" ~~~~~~~~~~~~~~~~~~~~~~ History: "Built in 1766 in the design of The Temple at Castle Howard in Yorkshire. It is said that Lord Delaval had the building erected in honour of his only son, John, who died in 1775 aged 20. Evidently he died of complications arising from having been kicked in a vital organ by a laundry maid who he was giving unwelcomed attention. The mausoleum was not used by the Delaval Family and is now in a ruined state, although in its heyday it must have been a fine building with a leaded glass dome." ~~~~~~~~~~~~~~~~~~~~~~ Follow PhotographyByUrbanEyes.com on: Facebook / www.photographybyurbaneyes.com / Twitter ~~~~~~~~~~~~~~~~~~~~~~~

This Selfie Light - -in-the-dark-depths-their-faces-beckoning-me- on net.photos image has 993x1023 pixels (original) and is uploaded to . The image size is 231362 byte. If you have a problem about intellectual property, child pornography or immature images with any of these pictures, please send report email to a webmaster at , to remove it from web.