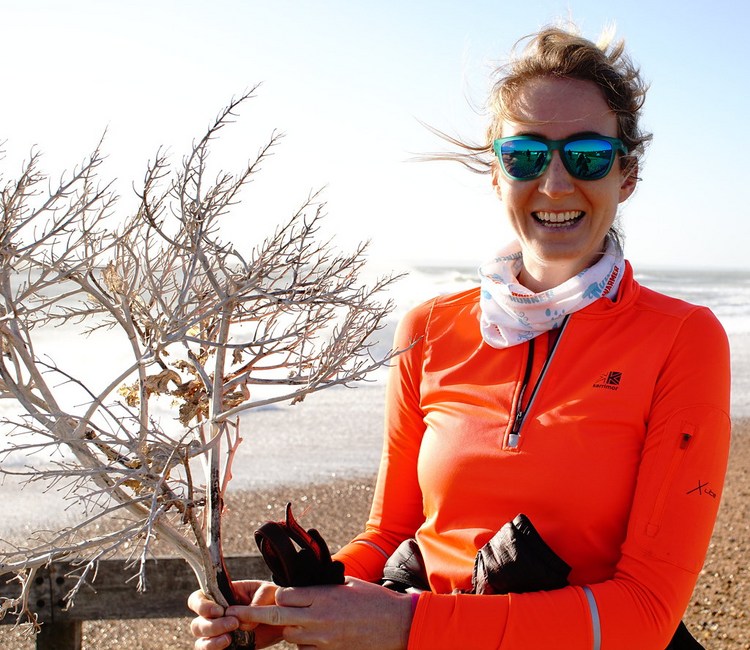 The Human Family The day at Hayling Island was blustery and sunny with huge waves crashing on to the shingle, then flattening out to slide up the beach, making me back off once or twice when taking shots. In a calm moment I noticed a young woman walking towards us carrying what appeared to be a rather artistic piece of driftwood. As she approached, I commented that it would make a good alternative Christmas tree. We passed the time of day and I found myself asking rather too quickly for a portrait - perhaps the urgency of the wind and waves around us had made me feel she might just walk away!. But she did agree. Introductions made, Charlotte suggested she might stand with her back to the sea. I was concerned that the shots were backlit and asked her to stand slightly at a diagonal angle. The light was very bright with the sun on the white surf, although the shots looked OK on the camera screen. Back home I reflected that maybe the light did defeat me a little but perhaps her sunglasses giving a selfie saved some of the effect of the backlighting. Charlotte asked how I would use the photos and I belatedly then explained my strangers' portrait project. Charlotte, a dentist, lives in Chester but is currently staying in their holiday home at Hayling. Her gentle retriever, Winnie, named after Winnie the Pooh, was with her, busy investigating the beach nearby, joining us only towards the end of our encounter. I offered photos. Charlotte said she would look online and I gave her the ref to my photostream. She told me where she had found the 'Christmas tree' further along the beach, some kind of bush, not driftwood. I thanked her and we said our goodbyes. Walking along, following a shingle path to avoid the floods on the beach, Ray spied some similar bushes, bleached white by the sun, and we brought a few home in the car boot. The portrait below was cropped in-camera** by my Sony. I really like it but whatever critera the camera uses for these crops it could not, obviously, understand the significance of the Christmas tree in my story! This is my #125 submission to the Human Family Group. To view more street portraits and stories visit: www.flickr.com/groups/thehumanfamily/

This Selfie Camera Light Stand - 125-charlotte on net.photos image has 1024x888 pixels (original) and is uploaded to . The image size is 257117 byte. If you have a problem about intellectual property, child pornography or immature images with any of these pictures, please send report email to a webmaster at , to remove it from web.