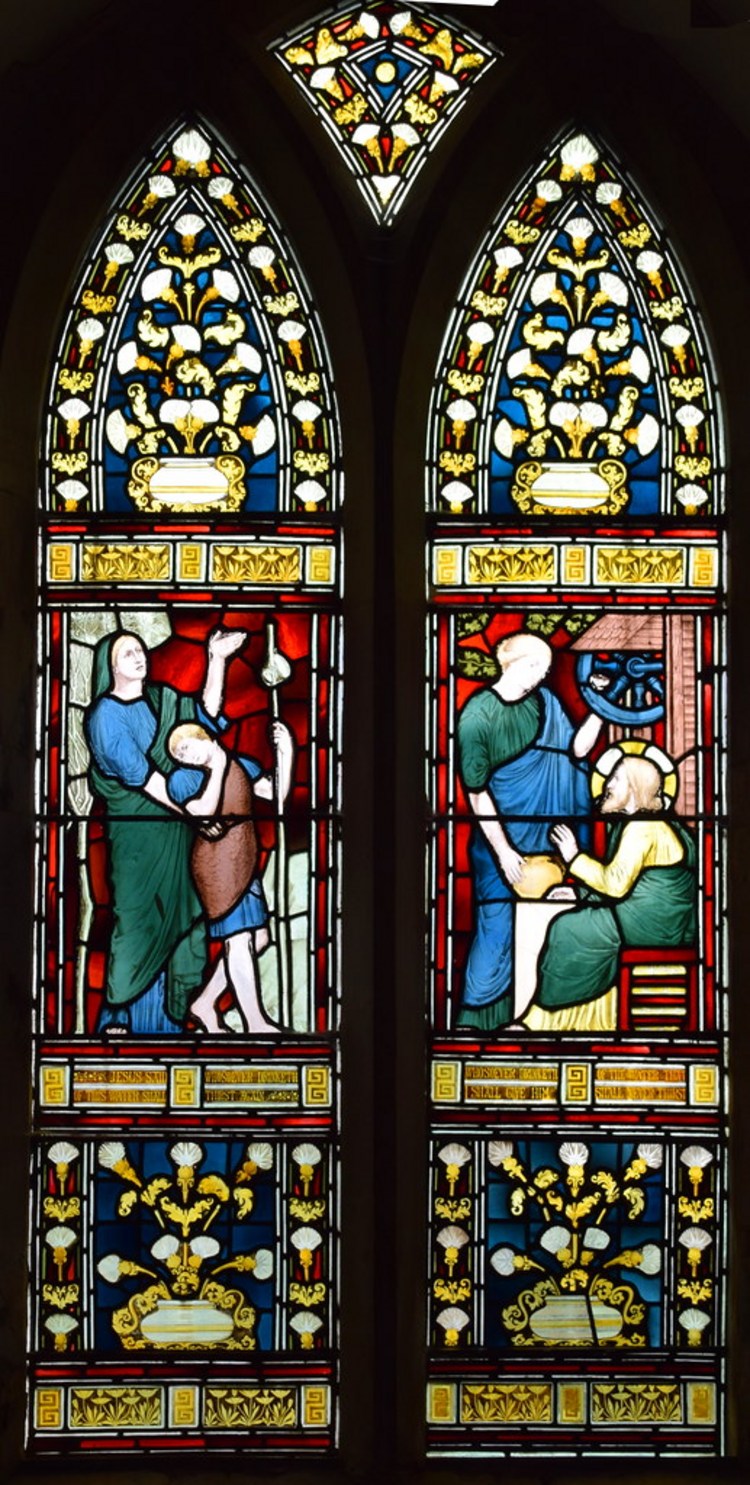 Haggar and Ishmael in exile, Christ meets the Samaritan woman at the well (Harry Ellis Wooldridge for Powell & Sons, 1870s)

St John the Baptist, Saxmundham, Suffolk Saxmundham is a fine little town more or less halfway between Ipswich and Lowestoft. Saxmundham, or 'Sax' as locals call it, grew to prominence in the 18th and 19th centuries, and it still has something of the character of a Victorian railway town, especially around the station. But it is not a tourist town, unlike its rival Framlingham, or 'Fram', just across the A12. What it does miss is a dominating medieval church, because St John the Baptist is away from the main street on the road to Leiston. The church sits up on a hill, his higgledy-piggledy churchyard falling away on all sides and full of interest. The headstones of 18th and 19th century worthies point to the wealth of the town in the past. Most famous is the headstone to John Noller, which has its own sundial. There is a crisp 19th century feel to the church in this sea of headstones. It was subject to an 1870s restoration at the hands of Diocesan architect Richard Phipson. However, Phipson was more sensitive to the need to preserve medieval survivals than his successor Herbert Green, and so the church is also full of interest. More recently, at the start of the 21st Century, there has been a splendid reordering and restoration of the nave, and so you step into wooden floors and modern chairs set sparingly in the light. I had remembered this as rather a gloomy space, and so coming back in early 2018 I was pleased and surprised. The font, though considerably recut, is one of the best Suffolk examples of the 15th century East Anglian style. There are aggressive little wild men around the base, and one of the shields features the instruments of the passion. Another medieval survival here, and a rare one, can be seen in the most easterly windows of each of the clerestories. This is a pair of stone corbel ledges that once supported the canopy of honour over the rood. They are both carved elaborately, and the northern one is castellated. The inscription on the southern side reads Sancta Johnannes, Ora Pro Nobis ('St John pray for us'). The simplicity and sensitiveness of the modern reordering allows the 19th Century windows to be a feature, and they are all good of their kind. Most are to members of the Long family. In the south chancel aisle, now set aside as a prayer chapel, is Harry Ellis Wooldridge's window of 1875 for Powell & Sons depicting the Sermon on the Mount, full of character and interest in an early Arts and Crafts style. Dominating the west end of the south aisle is a vivid depiction of the Ascension made by the O'Connor workshop after George Taylor had taken over as its boss. It is believed to have been designed by the Pre-Raphaelite artist Louisa Beresford. The setting of the new kitchen area beneath it is slightly surreal, though not unsuccessful. The most interesting glass is in the east window of the south chancel aisle. Here, Powell & Sons reset a collection of 17th Century roundels and ovals, including a hermit representing one of the four seasons, the Holy Kinship of St Anne, the Blessed Virgin and the infant Christ, as well as other Saints and biblical scenes.

This Samaritan Woman At The Well Sermon - haggar-and-ishmael-in-exile-christ-meets-the-samaritan-woman-at-the-well-harry-ellis-wooldridge-for-powell-sons-1870s- on net.photos image has 517x1024 pixels (original) and is uploaded to . The image size is 229659 byte. If you have a problem about intellectual property, child pornography or immature images with any of these pictures, please send report email to a webmaster at , to remove it from web.