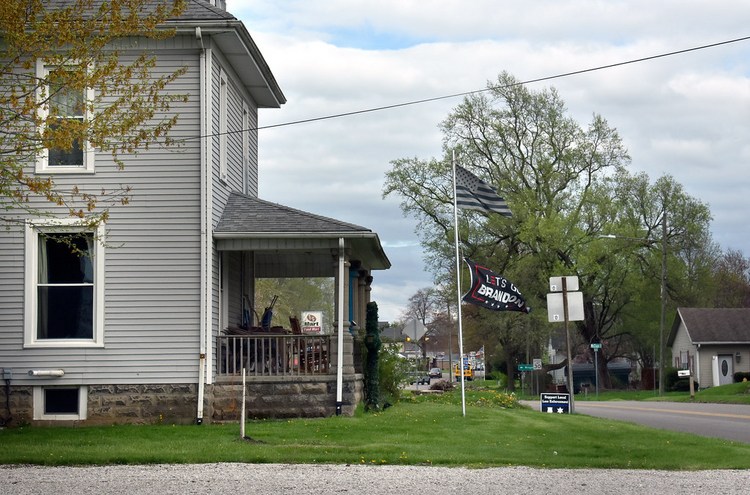 TRIGGER WARNING: I usually try to keep my language here at least PG-13, but the topic I'm discussing in this post requires me to say a particular word enough times to earn me an R rating. Specifically, I say it six times, and, really, considering the stance I'm taking here, not saying the word would be oddly hypocritical. If you do not want to see this word in writing, I strongly advise that you skip the following text. Here's a bland picture I've been holding on to for a little while, because I meant to attach it to a rant. I took this focusing on a flag outside some law enforcement fan's house in the metropolis of Waynetown, Indiana. You can see two flags on this pole. At the top, there's one of those American flags that have been color-shifted over to something that I think's supposed to be pro-cop, only it's hard to tell because it's old, and the colors have all faded. At the bottom, there's a flag that says, "Let's Go, Brandon." I'm posting this because that Brandon flag is the dumbest thing in the world. You might know the history if you pay attention to news of dumb things. It all goes back to a NASCAR race, when a young driver named Brandon Brown won the second-tier, Xfinity Series stock car race last October at Talladega. The Xfinity Series is NASCAR's version of the minor leagues, and it usually runs the day before the big Cup races I pay attention to. But the sports TV guys need practice, too, so they run the Xfinity races for a small audience on some cable channel, and they cover them the same way they cover the big races. And so, when Brandon Brown won his very first Xfinity race, the TV people went to the Winners Circle to interview him live on cable TV. That's when the crowd at Talladega started a chant during this live broadcast that said -- and pardon my English, but this is a quote -- "Fuck Joe Biden." Because, I guess, conservative types have spent the better part of a decade building their entire personalities with cult-like obsession around what they think of the President of the United States, and the most natural thing in the world for them is to celebrate a bush league stock car race by obscenely chanting their political opinions on national television at random and unrelated moments. And sure, this was a cable channel, but it wasn't one of those cable channels, and the FCC still doesn't like having that particular word broadcast on live television to people with overly sensitive ears. So the announcer tried to cover it up, saying something like, "Well, look at how much the crowd is behind Brandon Brown, chanting 'Let's go, Brandon!'" And thus, a meme was born. Conservative rednecks everywhere decided this was funny, so a bunch of them adopted "Let's Go, Brandon!" as their motto, their way of saying "Fuck Joe Biden" without actually saying "fuck," even though these are presumably all adults who've heard the word before without it busting their ear drums. But no, they think this little bit of euphemistic misdirection is the most clever thing ever, and they all cackle like maniacs over it. The thing is, it's all pointless and dumb, because words have meanings, and these meanings translate into thoughts and feelings in a human mind that matter far more than the noise that conveys them. When you say a word, your goal isn't to make a sound. It's to convey a meaning. You want to trigger a particular thought inside somebody's brain and have them picture a certain thing. And it doesn't really matter which sound your mouth makes to convey that thought, whether you say "hell" or "heck," "goddammit" or "gosh dangit," "shoot" or ... something else. You're still putting the same thought in somebody's head. The thoughts and messages are still the same. Like, for instance, when I said "something else" just now, there's a pretty good chance your brain thought of human excrement. I didn't have to say the word to convey the image. A euphemism might avoid a sound we've randomly decided is an ugly word, but it doesn't avoid the ugly thought, and the thought is what matters. So if you're going to convey the ugly thought, you might as well be honest about it and use the ugly word. There's also a certain kind of sniveling weasel quality to the "Let's go, Brandon" thing, like you're too much of a wimp to even stand by your thoughts. There were a lot of times during the administration of Brandon's ... er, Biden's predecessor when I wanted to say, "Fuck Trump." And you know what? I said it, because that's what I meant, so I might as well commit. I'm generally a fan of President Biden's work over the last couple of years, but honestly, I don't care if you or anybody else wants to tell him to fuck off. But have the courage of your convictions. Don't act like you're some middle school kid afraid to have your mommy slap a bar of soap in your mouth for saying a naughty word. And don't act like you're some genius because you figured out a juvenile way to avoid a particular collection of sounds we arbitrarily declared obscene. Fuck that. Don't be a baby. Just say it.

This Presidents Cup 2022 - lets-not-brandon on net.photos image has 1024x676 pixels (original) and is uploaded to . The image size is 261262 byte. If you have a problem about intellectual property, child pornography or immature images with any of these pictures, please send report email to a webmaster at , to remove it from web.