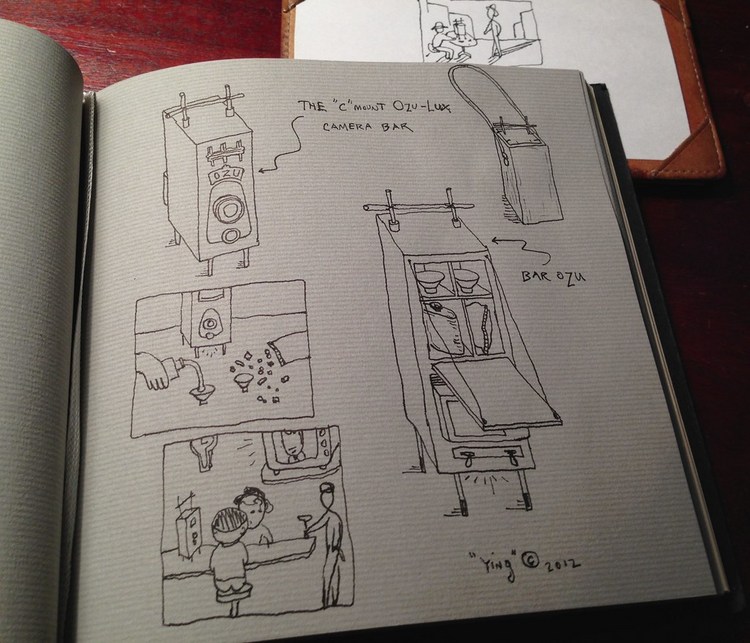 One of my three favorite film directors is Yasujiro Ozu. Being a person who likes disparate elements and wide associative leaps, I felt a dramatic connection for Ozu and cameras---because he used film cameras in the least possible way, he essentially had only 1-2 types of shots in his arsenal, by deliberate choice. Yet in terms of pedigree, he used the best Bolex for his work. And he is a film director's director. Ozu's shots in his films are carefully studied still lifes. They took time to make, and an attention to detail and composition. In keeping with the spirit of his type of movie, my proposed design for a camera dedicated to Ozu has has a c-mount movie camera lens, roughly 11-17mm which will make a wide view even after going through the M4/3's crop factor. The legs and lantern shape aren't for a japanese look, they are there for function as this camera is meant to be placed in two positions only: on the floor to shoot a composed still life, an Ozu view, and on the table when opened as a sake bar, for drinking. Sake was Ozu's preferred drink for inspiration. There is a bar light at the bottom of the camera, with an amber-orange filter over the bulb, especially good for the right mood, whether you set up this bar indoors or even outdoors on a chinatown park bench table, as shown in my extra drawing on the top. Bar Ozu is appropriate anywhere, as an intimate drinking venue. The legs are adjustable to do a perfectly level photograph. The camera is meant to resemble a lantern and with the legs, as a house. Ozu's films all are about the traditional Japanese family life, and its inevitable disintegration. As such he filmed primarily interior living room scenes. The Ozu-Lux will also have hood, as on a view camera, mounted under the bar's fold-down table top, with a light steel blue cloth, over the digital camera's lcd screen (it is still a Ying vintage digital) since views will be composed, and not shot from the hip. Although I'm drawing this as a c-mount, I would love to put on my uncle's old vintage Mercury lens (looking at my uncles old camera gave me the original inspiration for this design). The other colors of the camera bar will be a light brown rice bag "weave" pattern and vermillion (ozu's favorite color) and in keeping with the color palette he often used. The hidden sake bar inside the camera has a set of vermillion sake cups, a plastic sake flask, and a generous-sized compartment for a package of otsumame (drinking snacks) and/or a pack of cigarettes. Of course these are all for two people, as in most Ozu films' bar scenes, and in his own life as well, when collaborating with his long time script writer. Ozu rated his own films by the number of sake bottles they consumed to make the film. His artistic output was directly related to his drinking, according to himself. The extra drawer holds camera chips, and business cards for the Bar. Also shown above is the carrying case for the camera which is loosely designed like a milk crate in an ordinary japanese household from the 50's, Ozu's time. The circular figure below the camera lens is an idea for a spinning black and white pattern, meant to hypnotize subjects (if they bother to look at it) or at least get their attention, to get that "dazed" look one sees from the actors in Ozu films, something he deliberately sought. For further construction details, please contact me. PS: how many of you caught me on television?

This Plastic Business Cards Near Me - 2-bar-ozu on net.photos image has 1024x878 pixels (original) and is uploaded to . The image size is 200069 byte. If you have a problem about intellectual property, child pornography or immature images with any of these pictures, please send report email to a webmaster at , to remove it from web.