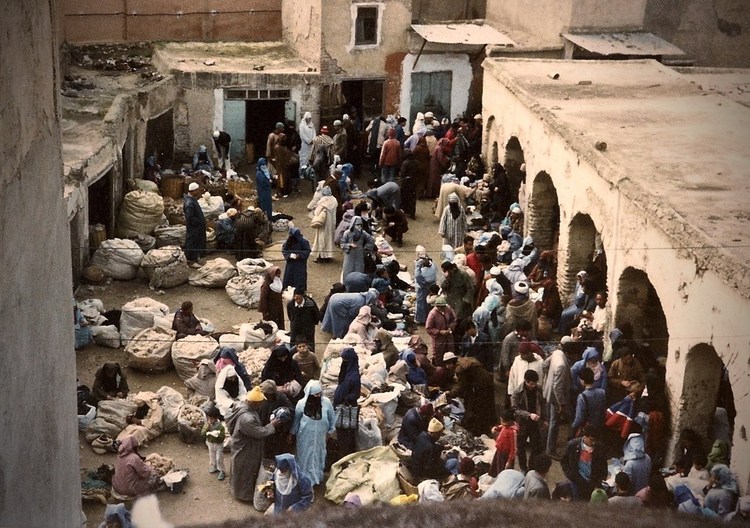 (Continuation of story which begins with the first upload entitled Portugal) We took the ferry across the Straits of Gibraltar and when we entered the city of Tangiers, a whole new exotic world opened before our eyes. I had first seen Moorish architecture in the Algarve. In the beginning, this landscape can appear foreboding and menacing. Later it becomes mysterious and welcoming. The street signs were all in French and Arabic. Not really a surprise, but I was once again reminded of my poor language skills. Helping Marvin navigate would be difficult for me, but I conjured up some bold confidence that worked for a short while. It was still early in the afternoon so we decided to press on to Fez and spend the night there. Soon we were in the middle of an open road with no towns in sight. That was a rather welcome sight. Navigation was easier I thought but then remembered that we had no local currency. I mentioned this to Marvin and he brushed off the fact saying that surely a town would appear soon where we could exchange money. The day went along and no towns appeared on the horizon. The sun was quickly going down in the sky. The arrow of the fuel gauge had also dipped dangerously low. In the age of no international credit cards this was a very serious problem as we had read that the Moroccans would only do business in dirhams. Suddenly, out of the corner of my eye, I saw a man on a motorcycle pull up along side our car. He was smiling and waving. He began to speak and when he did his first question was, “Are the two of you Americans?” I was dumbfounded. We were in a Volkswagen with Portuguese license plates. We had been away from America so long we had almost forgotten that we were Americans. How did he know? He continued to yell and screamed that he loved Americans because his brother had gone to school in America and we were very kind to him. He asked where we were staying and we shook our heads. I then blurted out that we had failed to get dirhams and that we were low on gas. He screamed back to follow him and he would help us. Soon we were pulling into a gas station and we could talk in a normal tone. His brother owned the gas station but our new friend would pay for our tank to be filled up. We could repay him the following morning after we exchanged currency. We then followed him to a lovely hotel and said good-bye until the morning. It was our first of many warm experiences with Muslim hospitality. The image is of the oldest medina in the world at Fez. It was named a United Nations World Heritage site just before we visited there.

This Places To Get Business Cards Printed Near Me - portugal-morocco-8- on net.photos image has 1024x721 pixels (original) and is uploaded to . The image size is 250668 byte. If you have a problem about intellectual property, child pornography or immature images with any of these pictures, please send report email to a webmaster at , to remove it from web.