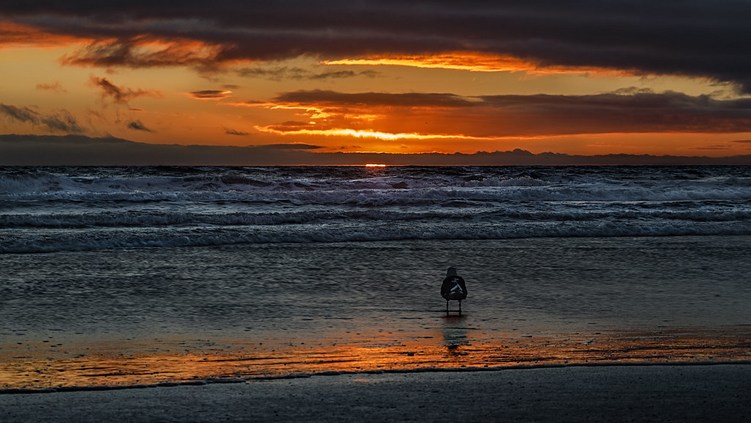 Anytime the weather called for clouds over the summer, I tried to make sure I was able to at least go somewhere with an open west facing view to snap some shots. I learned quickly that the [non-sunny] weather forecasts are almost always wrong around Los Angeles. When you look at a 10 day forecast and it's entirely sunny during that time, an occasional cloud will sneak in here and there but generally, summer in LA is dry, sunny and hazy or clear. On the rare chance the forecast calls for cloudy skies, at least 2/3 times ends in a disappointingly clear sky. I've driven to Venice 6 times in the previous month, each time with the promise of clouds in the forecast. The skyline I see when driving the hour to Venice is basically the same skyline I should expect to see once there and yet only half of those 6 trips resulted in a cloudy sky. It almost feels like weather reports are taunting me because it might say cloudy with the only break being the hour surrounding sundown or the forecast will say cloudy and yet 45 minutes into the drive, I'll realize that the report is incorrect. I trust my eyes now more than any forecast and one of the biggest advantages of Venice for me is that it's the only place I visit that gives me a full preview of the sky from the start to end of my trip. Of course the one aspect of weather that is easier to accurate report is tide and height of the waves. While it seems almost every day has some warning of larger than "normal" surf, I typically ignore it since my main focus is the sky. When I headed to Venice last Saturday, the forecast was calling for 10 straight days of clear and sunny beginning the following day so I decided to go, despite turning around the previous 2 trips due to blank skies. I was hoping for something colorful and another opportunity to shoot reflections on what I consider a perfect shoreline for them. Due to traffic and Saturday parking issues at Venice, I arrived on the beach about 5 minutes before the sun dipped below the clouds and horizon. Wind was relatively high compared to previous trips and the low tide I had almost come to expect was replaced with high surf and a hide tide. The normally reflective, flat shoreline was now a duller, kinda muddy version that was also maybe 60ft shorter than normal. I did get the clouds I wanted which was a plus, but I also wanted the reflections and a bit more time to shoot the setting sun. I basically had enough time to set up quickly, and get a few shots of the sun as it cut through that cloud in the middle. I normally adjust my focus on the reflective shoreline but with so little non moving surface area, I decided to follow this bird around and focus on him when he'd pause or wander into the frame. Generally, I never focus the lens on the sky anymore because there’s not much to latch focus on and I’d much rather have a detailed foreground that a marginally more detailed sky but no foreground definition. Skies like this at least offer me enough ambient light after the sun sets that I still can get some lower light shots in but I ended up driving more than an hour in traffic, with 15 minutes to find a semi legal parking space and an hour back for 10 minutes of nice shooting conditions of shooting which bummed me out a bit. I'm going to force myself next time the weather is favorable to arrive much earlier and perhaps the next time there's a high tide, I'll pick a location where the waves will work in my favor rather than against. I'll also be sure to check the surf forecast before taking Scotch here since the flat shoreline is the sole reason I want to bring him (well and lack of people after dark). WHERE & WHEN Venice Beach Venice, California October 15th, 2016 SETTINGS Canon T4i EF-S18-135mm IS STM @62mm ISO 100 f/8 1/25th second CPL

This Perspective Taking Definition - -that-birds-eye-view- on net.photos image has 1024x577 pixels (original) and is uploaded to . The image size is 163217 byte. If you have a problem about intellectual property, child pornography or immature images with any of these pictures, please send report email to a webmaster at , to remove it from web.