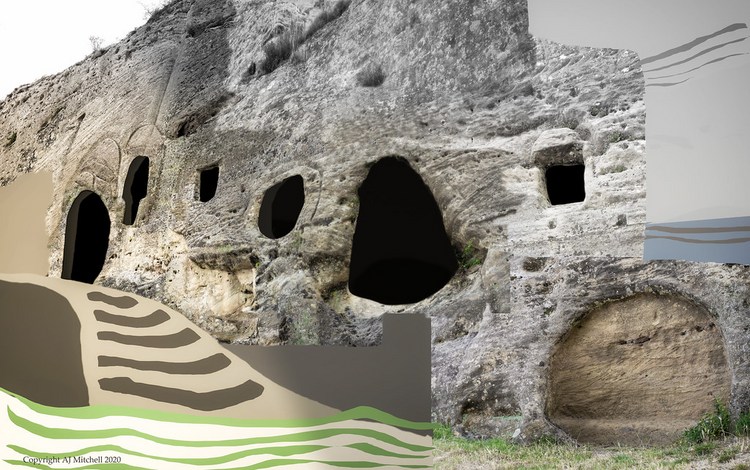 The exterior of this mighty troglodythic site currently has many features from historical ages including steps, a porch, bell tower (both high on this cliff's top, and as a tower above a second artificial cave and outcrop) and stone infilled openings, with new window frames held by the infill. For this montage, all of these features have been removed, leaving the carved stone elements that may contain the lines from the range of the last ages of prehistory to post protohistoric influence. Whilst the image is a minefield of small errors, with much perspective warp and patch work, it does present a raw surface to then infill with colour, question and decoration from the viewer's minds-eye. I have added several Flickr text boxes to highlight areas of interest. 'Santos Justo y Pastor' is carved into the first west facing cliff of Monte Cildá in an area of Spain where regional boundaries dance and even bubble between the vivid Cantabrie and Castille y Leon regions. After this first cliff's top, there are 500m of sloping fields before the last climb to a high plateau and the Celtiberic Castro of Mont Cida. Here, "a monumental battle between Romans and Cantabrians took place in the year 25 - 26 BC, culminating in the taking of the city, in which the emperor himself intervened." A battle that was the prelude to another fierce Celtiberic battle on 'El Castro del Monte Bernorio' just 8km to the north east - all part of a 200 year war to take the advanced Iberian resource for kleptocratic Roman power. It is a detail, but Mont Bernino also has a series of troglodyte spaces at its foot: currently known as the 'Ermitage rupestre de San Martin' with the dates of 'El Castro del Monte Bernorio' ranging between the Bronze and Iron ages. From the Castro of Mont Cida, high over the above site, the naturally sculpted hill of "Las Tuerces y el Cañón de la Horadada" can be gazed over. Magical mountains. The advanced Bronze and Iron age town of 'Poblado de la Hoya' is 100km down river and Santos Justo y Pastor was on a most compelling route to the Atlantic coast, so imagining initial lone activity and backward degeneracy would miss on the fluid and elegant mosaic of the late Iberian pre and proto historic ages. Whilst these troglodyte sites often contrast with the visual conventions of parallel and squared lines, their ability to turn great old ritual huts into 'memory' in permanent stone may have been registered as 'utter wonder' for dynamic local and passing populations. With parallel and squared lines already heavily present in the bronze and Iron age 'Poblado de la Hoya', arguments that many of the organic shapes and forms of this and other just such sites predate the Iron Age need to be considered. Finding evidence for this 'first impression' hypothesis being a subject of enquiry beyond simple terms like Visigoth and Moorish. A starting hypothesis may consider a long gestation for the carved space, via Iron age alcoves to greet/verfiy visitors prior to their walk up to hill top sites, perhaps artificial alcoves that have in turn grown slowly from earlier prehistoric occupation periods: "a pagan temple repurposed and expanded by Christian monks.". The chapters from history include the (4-6th or earlier), 7th, 8th, 12th, 16th and 19th centuries. Whilst I cover the site specifically for issues of prehistory, it retains fascinating layers of compelling detail from the ages of early history and removing elements from the image is not motivated by iconoclasm. The overview from this outside blog includes a range of shots: buscandomontsalvatge.blogspot.com/2015/01/olleros-de-pisu... AJM 06.11.20

This Perspective Taking Activities - santos-justo-y-pastor-montage-of-potential-pre-christian-elements on net.photos image has 1024x642 pixels (original) and is uploaded to . The image size is 252813 byte. If you have a problem about intellectual property, child pornography or immature images with any of these pictures, please send report email to a webmaster at , to remove it from web.