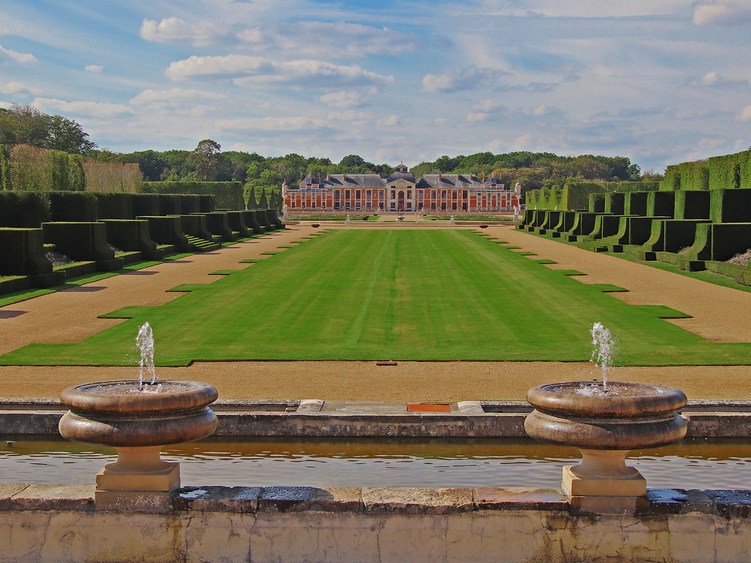 The Château du Champ-de-Bataille, seen from its extensive gardens, Sainte-Opportune-du-Bosc, Normandy, France Some background information: The Château du Champ-de-Bataille (in English: "Palace on the battlefield") is a palace in the French department of Eure within the region of Normandy in Northern France. Before the regions of Upper and Lower Normandy were merged in 2016 becoming one region, the stately home belonged to the region of Upper Normandy (in French: "Haute-Normandie"). The palace lies between the little town of Le Neubourg and the village of Sainte-Opportune-du-Bosc on the municipal territory of Sainte-Opportune-du-Bosc. The landscape where it is located, is named "Campagne du Neubourg", a level country bordered by the rivers Iton to the east and Risle to the west. The Château du Champ-de-Bataille is also situated about 35 km (22 miles) to the southwest of the city of Rouen, about 55 km (34 miles) to the southeast of the city of Le Havre and about 130 km (81 miles) to the northwest of the French capital Paris. in 1952, parts of the estate were listed as a French national historic monument ("monument historique"), in 1971, even more parts were added and since 1995, the whole site has landmark status. Some sources claim that the palace was named after the Battle of Sainte-Opportune-du-Bosc, in which the troops of William Longsword, then ruler of the Normandy, allegedly fought against the army of Robert II (also known as "Robert the Dane"), archbishop of Rouen and Earl of Évreux. However, as the battle is dated to the year 935 and Robert the Dane died not before 1037, others believe that the Battle of Sainte-Opportune-du-Bosc is just a legend. Instead they assume that the first owner of this site was a nobleman named Bataille. Historically confirmed is the year of the château’s start of construction, 1653. Two years before, Alexandre, Earl of Créquy-Bernieulle, was sentenced to exile in the countryside. He was lucky not to have been sentenced to death, as he was a member of the rebels during the so-called Fronde. The Fronde was a series of civil wars that took place between 1648 and 1653. During the Fronde, Alexandre de Créquy was imprisoned and banned, while the insurrection against the royal absolutism the young king Louis XIV and his loyal chief minister Cardinal Mazarin was defeated. De Créquy had no other chance but to resign to his fate and hence, decided to erect a palace in his rural exile, which reminded him of the splendour of the royal court and also allowed him to demonstrate his power. Construction started in 1653 and was finished in 1665. To realise his dream, he engaged the renowned architect Louis le Vau, who was also involved in the construction of the royal Château de Versailles. The palace’s impressive inner courtyard as well as its classic lines and perfect proportions make it a unique example of the baroque architecture of its day. After de Créquy’s death, his nephew Gabriel-René, Marquis of Mailloc, inherited the mansion. In 1720, he married Claude-Lydie d’Harcourt, but already died four years later. After his death, the Château du Champ-de-Bataille came into possession of his wife’s family. Soon afterwards, it was inhabited by Anne-François d’Harcourt, Duke of Beuvron. During the French Revolution, the palace was plundered. In 1802, it was still in possession of the family d’Harcourt, but when it was offered the British merchant Thomas Thornton, he answered that despite the Château du Champ-de-Bataille is still beautiful, it has no central water supply and that’s why he has to decline with thanks. In 1805, it was sold anyway, but rebought by the Earl of Harcourt in 1903. In 1936, it was sold again and utilised as an orphanage. During World War II, it was first occupied by British troops and then by German troops. After the liberation of France the palace served as a prisoner of war camp. In 1948, the family d’Harcourt rebought the château once again and in 1966, the family celebrated its millenary anniversary in its stately home. 1992 was another important year in the history of the Château du Champ-de-Bataille, because in that year the palace was bought by the French architect, interior and garden designer Jacques Garcia. He carried out large-scale renovations and restored its former 18th century splendour. But he also attended to the meanwhile ragged gardens and recreated the large French formal gardens in all their glory. Garcia was inspired by sketches of the original gardens, long vanished, which showed the placement of the great terrace, the broderies and bosquets, and the proportions of the squares of Apollo and Diana. These features were scrupulously reproduced, while the new features of the garden took their "measure and tone" from the original model. Today, the garden is listed by the French Ministry of Culture as one of the Notable Gardens of France ("Jardin remarquable"). Both gardens and palace can be visited (if current corona regulations allow it).

This Perspective In A Sentence - deserted-battlefield on net.photos image has 1024x768 pixels (original) and is uploaded to . The image size is 263216 byte. If you have a problem about intellectual property, child pornography or immature images with any of these pictures, please send report email to a webmaster at , to remove it from web.