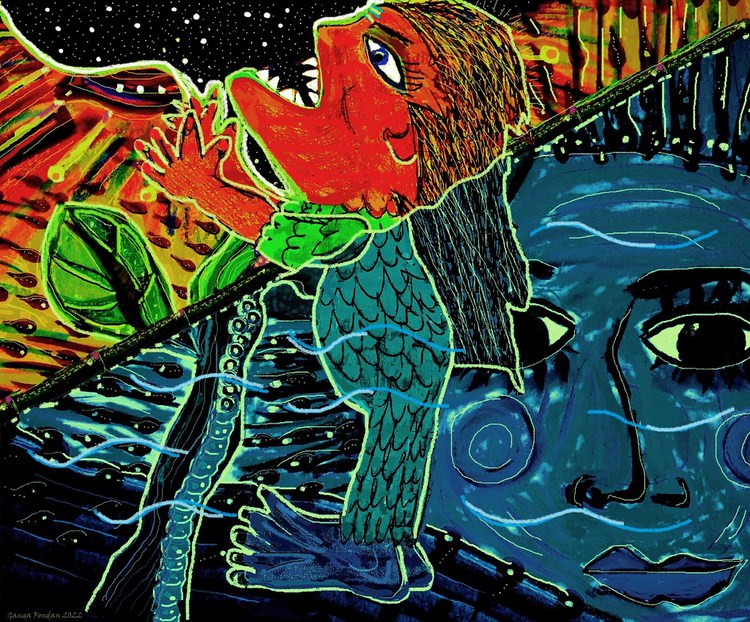 Part Two Such intense emotions welled up inside of her as she began to see it. At first it was just teeth, an open mouth consuming EVERYTHING… a loathsome eating monster and in between those teeth were all the natural resources of the earth. Oil, coal, iron ore,wheatfields, animals, diamonds, gold, silver, copper, tin, phospherous, cadmium, zinc, forests, lakes all pouring into that hideous mouth…WANTING WANTING no matter what the cost and suffering of beings. She heard the chewing and gnashing of teeth and she despised the monster and gave him more shape and color. She wanted to see it more clearly. A huge head, tiny body, scales appeared…and huge feet…blue ones that didn’t care what it stepped on and destroyed. Arms reached out to TAKE, POSSESS, HOLD and CRUSH. Fingers extended for MORE and MORE. It became the symbol of immeasureable suffering on the planet. It contained all the selfishness, all the greed, the manipulation, the lies and insatiable lust for pleasures and profit. It was ready to shove all countries into its gluttonous jaws. The sun appeared in the sky and in the water. Even within the lifeblood of the monster, light bubbled and moved and embraced all that was being poured into that self-serving belly. Suddenly a million stars sparkled in the night sky also beaming down onto the creature with the wide open mouth and the outstretched arms. Because those twinkling lights were too far away, the creature growled and roared ferociously threatening to devour the entirety of the heavens. Observing this madness, she suddenly drew a line between the sky and the earth immersing half of its body in a slowly rising tide. In that exact moment, she saw with new eyes. The creature looked like it was standing in a crib like a baby screaming for its mother. She could not shake the nurturing feeling that rose inside of her. She suddenly realized that this creature had no idea of what it really wanted. It screamed out of pain and loneliness, out of weakness and desperation. She could see its powerlessness and agony. It was not the first time such a revelation moved her heart into deeper levels of understanding and compassion. It was then that the wisdom flooded into her waiting heart. Fear disappeared. She understood the enormous advantage her awareness held. No matter what happened next, she was sure that this creature had absolutely no power over her. The meaning of the words of an Ancient Master put everything into perspective. “Forgive it, it knows not what it does.” Click Image Below for Part One

This Perspective Drawing Ideas - 2-of-2-forgive-it-it-knows-not-what-it-does- on net.photos image has 1024x849 pixels (original) and is uploaded to . The image size is 392461 byte. If you have a problem about intellectual property, child pornography or immature images with any of these pictures, please send report email to a webmaster at , to remove it from web.