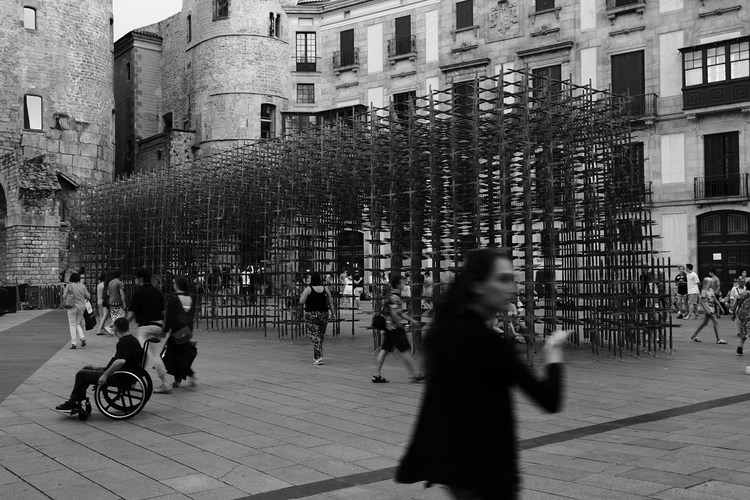 Ephemeral urbanism The nature of urban space and how it is occupied is the focus of this ephemeral project which consists of 7 interventions within public open spaces located in the Raval, Gòtic, Ciutadella and Barceloneta neighbourhoods of the city. Connected with the activities marking the tercentenary celebrations of Barcelona the idea was to invite international profile architects to pair with local architectural schools (LASALLE, ESARQ-UIC, IAAC and ELISAVA) in order to explore different concepts associated with 1714; Identity, Freedom, Diversity, Democracy, Memory and Europe. These structures will subsequently be recycled and relocated to other areas. The architects were selected by Benedetta Tagliabue (of EMBT), curator of the project and co-author of one of the interventions within the Parc de la Ciutadella, they others are respectively; Urbanus, Anupama Kundoo, Odile Decq, Peter Cook with Yael Reisner, Grafton Architects and ETH Zurich & Urban Think Tank. Although on the one hand public space and how it is occupied in Barcelona seems to be increasingly under threat (the right to public protest on the city’s streets, the eviction of 15M from Plaza de Cataluña) institutional support for the ‘right kind of cultural projects’ (Can Vies need not apply) is clearly channelled along political lines with BCN RE.SET, which celebrates all that sets Catalonia apart. Nonetheless each of the interventions provides a fascinating take on these spaces from the perspective of world renowned architects taking a fresh look at Barcelona’s squares; Plaça Nova (Gotico), Plaça Salvador Seguí (The Raval), Plaça del Mar (Barceloneta), Plaça dels Angels (El Raval) Plaça de la Mercé (El Raval), Arc de Triomf (Sant Pere) and the Ciutadella park. Some of the projects are sublime both in terms of their concept and their making, specifically the Urbanus intervention which deals with Identity and evokes the ghost of an aqueduct in Plaça Nova adjacent to the remaining Roman ruins. Constructed from a repetitive 3D timber cross with slots the overall effect is mesmeric, like a shadow or a hologram, we’re not quite sure if it’s real or projected... Source: barcelona.b-guided.com/en/noticias/b-ing/bcn-re-set-ephem...) Identity / URBANUS with ETSALS (Escuela Técnica y Superior de Arquitectura La Salle, Tutors: Eugeni Bach, Josep Ferrando) Plaça Nova Drawing on the dynamic formation and re-formation of identity in our modern age, Chinese practice URBANUS took an alternative approach to make their installation reflect the identity of Barcelona, managing the tension between their status as outsiders and the inside knowledge of students at La Salle Barcelona. Source: www.archdaily.com/521978/barcelona-commemorates-300-years... Plaça Nova is the place where the old city was born : Barcino. These letters are sculptured in the square. Two Romanesque towers flank the door Del Bisbal. This square becomes a market with antique dealers every Thursday from 9h to 20h. Festivals and Sardanas are held here also. (Barcelona.com)

This Perspective Drawing Activities For Students - barcelona-pla-a-nova on net.photos image has 1024x683 pixels (original) and is uploaded to . The image size is 221737 byte. If you have a problem about intellectual property, child pornography or immature images with any of these pictures, please send report email to a webmaster at , to remove it from web.