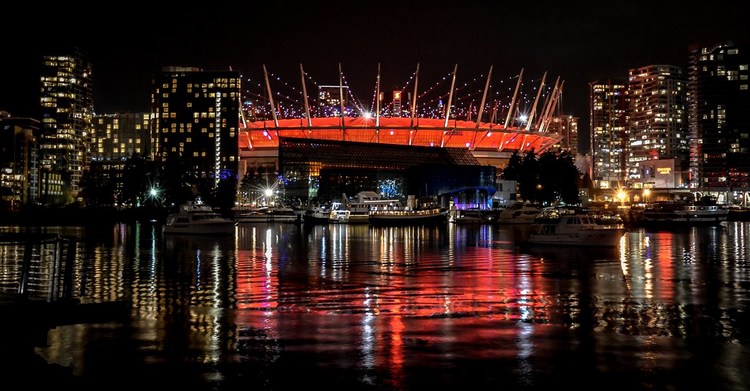 Shooting into the darkest of night, while blindly making adjustments to a camera that I could no longer see........I attempted to zoom across this harbor in hopes of capturing, 'These city lights'. BC Place Stadium (center) is a multi-purpose stadium located on the northern side of False Creek, The stadium is home to the BC Lions, CFL (Canadian Football League). The Vancouver Whitecaps FC of Major League Soccer and the annual Canada Sevens (part of the World Rugby Sevens Series) as well as the BC Sports Hall of Fame. The stadium also served as the main stadium for the 2010 Winter Olympics and 2010 Paralympics which Vancouver hosted. On this particular evening, BC was lit in red in honor of Remembrance Day. Remembrance Day (sometimes known informally as Poppy Day) is a memorial day observed in Commonwealth of Nations member states since the end of the First World War to remember the members of their armed forces who have died in the line of duty. Vancouver, BC Canada

This Nations League - these-city-lights- on net.photos image has 1023x533 pixels (original) and is uploaded to . The image size is 159811 byte. If you have a problem about intellectual property, child pornography or immature images with any of these pictures, please send report email to a webmaster at , to remove it from web.