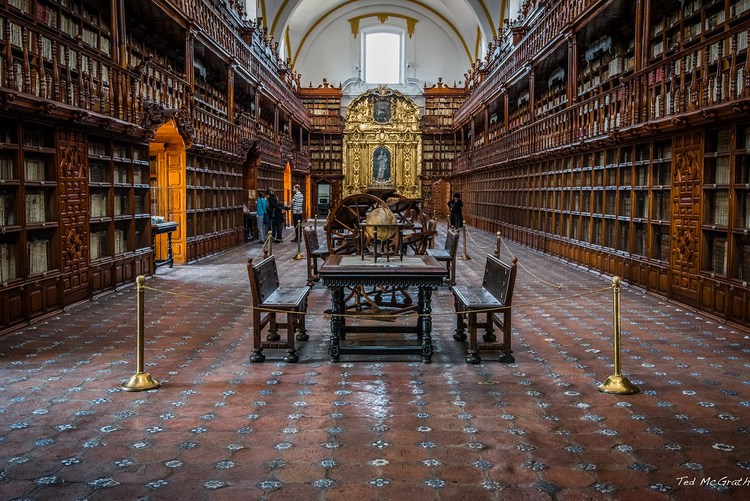 We went to visit the gorgeous library but missed the plain entrance door. The library is on the second floor of the cities cultural centre. A library guide happened to be standing on the street and took us in for the free guided tour (you pay $25 per person to enter). Worth every peso. Its a stunning interior. The origins of Palafoxiana Library date to 1646 when a personal collection of approximately 5,000 volumes was contributed to the Colegio de San Juan y San Pedro by Bishop Juan de Palafox y Mendoza. In 1773, Bishop Don Francisco Fabián y Fuero ordered the construction of the Palafoxiana Library in the historic center of the city of Puebla to house Bishop Juan’s donation. Biblioteca Palafoxiana was the first public library established in the Americas. In 1981, the Mexican government declared the library a historic monument. In 2005, UNESCO added the Biblioteca Palafoxiana to the Memory of the World list, formally recognizing its international significance. The library preserves 45,058 volumes dating from just before until just after the Colonial era. Many of its works are of global importance. The library is also noteworthy for its sheer beauty. The bookshelves, commissioned by Bishop Francisco Fabián y Fuero in 1773 (and expanded to include a third level in the 1800s), consist of finely carved cedar, wild sunflower, and ayacahuite, a native white pine. A three-story gold altar at the far end of the room features an oil painting of the Virgen of Trapani, believed to be modeled after the 14th-century sculpture attributed to Italian sculptor Nino Pisano. The libraries of the religious orders of Mexico were located in Puebla, Morelia and Oaxaca. Palafoxiana in Puebla is the oldest library in the Americas, and is the only library of the three remaining intact and authentic, as it was continuously conserved. After the 1999 earthquakes more than 1,000 listed historic buildings in Puebla suffered some damage (including the library, and the heritage of Puebla was in a state of emergency. A World Monument Fund restoration project returned the library to its original grandeur and strengthened the architectural elements so that the building and its bookshelves would withstand vibrations from future earthquakes. The project helped to preserve the cultural legacy and philanthropic history of the library and the city of Puebla. The original tiled floor made from clay and talavera was also restored after the earthquake.

This Mexico Earthquake History - 2016-mexico-puebla-palafox-library-1-of-2 on net.photos image has 1024x684 pixels (original) and is uploaded to . The image size is 349169 byte. If you have a problem about intellectual property, child pornography or immature images with any of these pictures, please send report email to a webmaster at , to remove it from web.