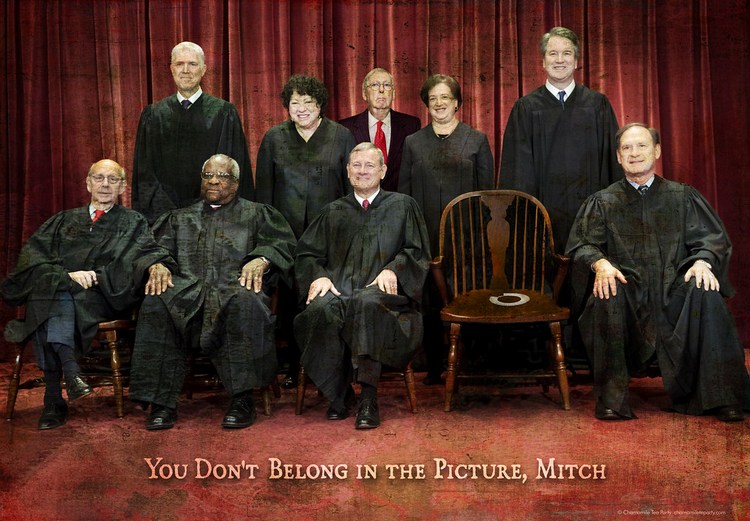 You Don't Belong in the Picture, Mitch

The day Justice Antonin Scalia died in February 2016, Senate Majority Leader Mitch McConnell stated, “The American people should have a voice in the selection of their next Supreme Court Justice. Therefore, this vacancy should not be filled until we have a new president.” This was nine months before the presidential election. And he refused to allow the Senate to vote on President Obama’s Supreme Court nominee, Merrick Garland. Four years later, just hours after Justice Ruth Bader Ginsburg’s death, McConnell wasted no time in announcing his hypocrisy when he stated, “Americans re-elected our majority in 2016 and expanded it in 2018 because we pledged to work with President Trump and support his agenda, particularly his outstanding appointments to the federal judiciary. Once again, we will keep our promise. President Trump’s nominee will receive a vote on the floor of the United States Senate.” There were less than 50 days before the 2020 presidential election. In 2016, Senator Lindsey Graham supported McConnell’s actions. He said, “I want you to use my words against me. If there’s a Republican president in 2016 and a vacancy occurs in the last year of the first term, you can say Lindsey Graham said let’s let the next president, whoever it might be, make that nomination.” Graham reiterated this opinion in 2018. He, too, made a one-eighty after Ginsburg’s death, pledging to support “any effort to move forward regarding the recent vacancy created by the passing of Justice Ginsburg.” Democracy is messy. Partisan politics are brutal and have cost this country’s citizens their lives, livelihoods, and well-being. If you’d like a vision of what life could be like in a politically diverse yet honorable country, read Eugene Scalia’s story about his father and Ginsburg’s relationship. From total opposite sides of the political spectrum, they were genuine friends who always said what was on their minds. McConnell’s and Graham’s hypocrisy is about power and control. Never mind what 62% of Americans people think. Feel free to pass this poster on. It's free to download here (click on the down arrow just to the lower right of the image). See the rest of the posters from the Chamomile Tea Party! Digital high res downloads are free here (click the down arrow on the lower right side of the image). Other options are available. And join our Facebook group. Follow the history of our country's political intransigence from 2010-2018 through a six-part exhibit of these posters on Google Arts & Culture.

This Merrick Garland Nomination - you-dont-belong-in-the-picture-mitch on net.photos image has 1024x712 pixels (original) and is uploaded to . The image size is 250661 byte. If you have a problem about intellectual property, child pornography or immature images with any of these pictures, please send report email to a webmaster at , to remove it from web.