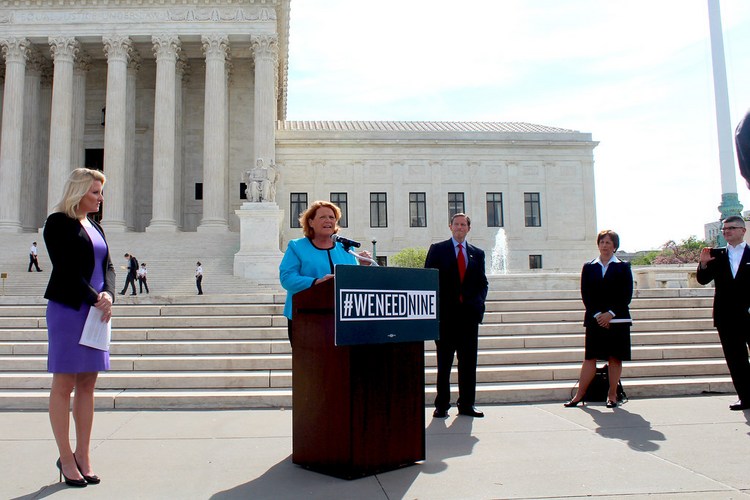 Heitkamp Urges Congress to Do Your Job Outside U.S. Supreme Court

On the 21st anniversary of the Oklahoma City bombing - which U.S. Supreme Court nominee Judge Merrick Garland was lead prosecutor in - U.S. Senators Heidi Heitkamp (D-ND) & Richard Blumenthal (D-CT) joined attorneys who worked with Judge Garland on the case to urge Congress to do it's job, just as Judge Garland did during that case, and hold a hearing and up or down vote on his nomination. This photograph is being made available only for publication by news organizations and/or for personal use printing by the subject(s) of the photograph. The photograph may not be manipulated in any way and may not be used in commercial or political materials, advertisements, emails, products, promotions that in any way suggests approval or endorsement of U.S. Senator Heidi Heitkamp.

This Merrick Garland - heitkamp-urges-congress-to-do-your-job-outside-u-s-supreme-court on net.photos image has 1024x683 pixels (original) and is uploaded to . The image size is 190719 byte. If you have a problem about intellectual property, child pornography or immature images with any of these pictures, please send report email to a webmaster at , to remove it from web.