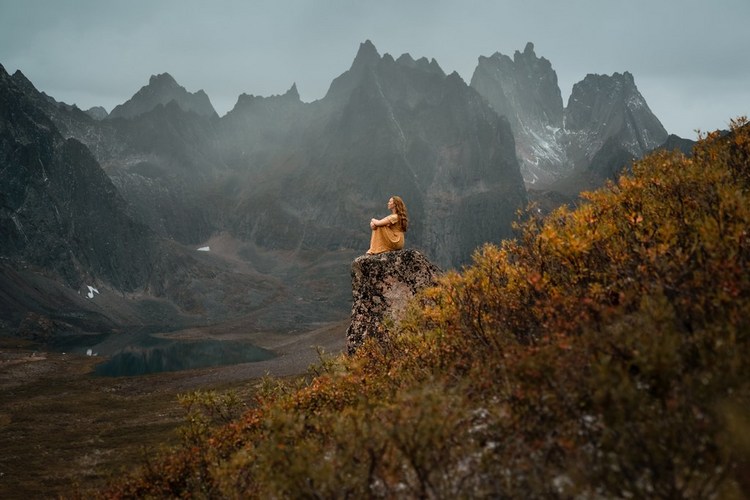 Life has a funny way of being unlike anything you imagine it will be. After years of dreaming, this year I was finally able to visit my #1 bucket list location - Tombstone Territorial Park. I reserved permits months in advance, and when August came I drove 45+ hours north into Yukon territory, joined by two of my best friends, ready to hike into the back-country to spend a week under the awe-inspiring, towering presence of the Tombstones and creating a new series of personal photos. This ended up being the only photo I got. On the second day we were overtaken by a blizzard, and as we were crossing a boulder field one of my friends slipped and fell head first several feet down into the sharp boulders, splitting his head open. Looking back gives me chills to imagine how our situation could have ended much worse - it was immediately apparent we didn't have enough supplies for the medical attention needed. To make a long story short, our emergency radio wouldn't turn on (even though it was fully charged the previous day), but somehow the adrenaline carried us calmly through each moment - I ran ahead to the next campsite and found a team of park rangers (who were only in the back-country to re-build part of the trail, thank goodness for their timing!), and with their help we were able to get a helicopter evacuation 3 hours later (kudos to the pilot for flying in a blizzard as night fell - apparently the only reason he did was because he had just landed there the night before to practice for emergencies). All in all, we got so lucky in what was an unlucky situation. 3 months later my friend is still recovering and doing well. :) People have been asking if I'm disappointed this dream trip didn't go according to plan. The weird thing is, I'm not - not in the least. I've seen up close the dark possibilities of what could have been with people I care about deeply, and I've come away with a profoundly heightened sense of gratitude and a much deeper respect for nature. And a reason to someday return and finish what we started.

This Medical Supplies Near Me - tombstone-solace on net.photos image has 1024x683 pixels (original) and is uploaded to . The image size is 128700 byte. If you have a problem about intellectual property, child pornography or immature images with any of these pictures, please send report email to a webmaster at , to remove it from web.