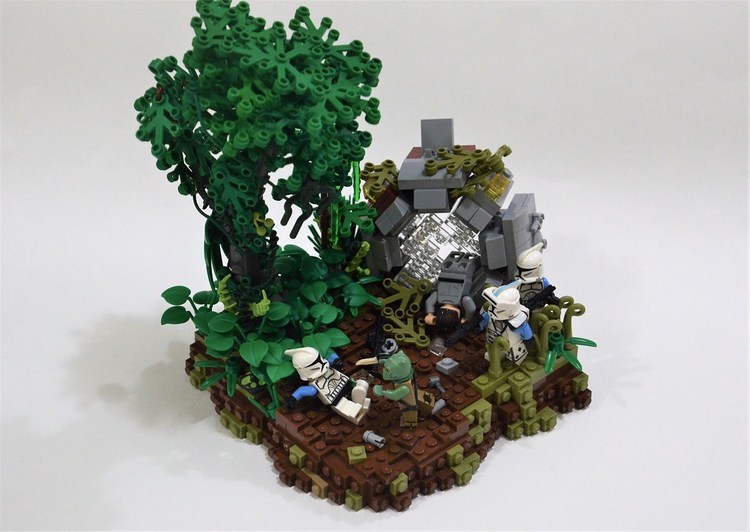 Stormy weather meant I couldn't get a great picture so I'll probably just settle on this one or post a new one tomorrow. Anyways, here's the story. Doesn't perfectly align with the build so I'll change a few details when I re-upload. CT-2497 “Lucky” 1st Regiment : 253rd Legion ////// B E G I N L O G \\\\\\ After a few minutes of fending off buzz droids and B1s, we were informed that evacuation of our sector of the Endurance was complete and we were to abandon ship ourselves before it was late. Jockey ordered us to get into the remaining pods and jettison. I jumped into a pod with two officers who were the last to arrive, backing into it while gunning down a swarm of pistoekas. We jettisoned and began hurtling towards the surface of Cularin. Through the viewport I could see the damage done to the Endurance. She had taken a heavy blow and was slipping down into the planet’s atmosphere. Smoke billowed from gaping wounds in her hull. Separatist bombers and boarding ships swarmed around her. I noticed a hyena droid bomber coming right towards our pod. We watched helplessly as the bomber made a run on us and fired off a burst. Our engines and stabilizers got hit and we began spinning out of control. We barreled through the atmosphere towards the jungle below. I managed to grab onto a strap from one of the seats but the violent spinning flung me back against the wall. The pod slammed into the side of a cliff and my head banged into something. Everything went dark. When I woke up all was still. I was sprawled out on the floor of the pod. My head pounded and all of my bones ached. My visor had cracked so I removed my helmet and set it aside. I looked up and saw the viewport had been shattered open. One of the officers was slumped over, his still body hanging out of the front of the pod. I couldn't see the other, he must have been flung out during the crash. Through the broken viewport I could see a thick jungle and a long swathe of turned up dirt and broken vegetation where we had landed. Ignoring a sharp pain in my side, I got up and crawled over to the officer. I checked his vitals. He was gone. I laid back against the wall of the pod and thought of my next move. I had to regroup with the rest of the squad. I made my way over to the distress beacon but it was fried. I activated my personal distress signal, which was much weaker but still did the job. Hopefully there were other survivors in the area. I began looking for medical supplies and a weapon when I heard bushes rustle outside. I stopped and listened for a minute. Probably just an animal. I continued to look for supplies and got out of the pod to look for my blaster. More rustling. I called out to see if it was a another clone, or perhaps the other officer than had been thrown from the pod. No response. My rifle was a few feet away in the mud. I bent over to pick it up. The barrel was busted. Useless. I heard more rustling, much louder and closer. This time it was accompanied by a low clicking sound, almost reptilian in nature. Something began to come crashing through the bushes. I spun around to face it and a large creature slammed into me, throwing me back. I looked up from the ground to see a lizard-like humanoid. It hissed at me and lunged down with its claws. I kicked violently and knocked it to the side. I scrambled to my feet and backed away, looking frantically for a weapon. I grabbed a charred piece of metal from the wreck and swung it at the advancing lizard. It grabbed it and tore it from my hands. This creature was far stronger than me. It swung its heavy, scaly arm right into my already pounding head. I crumpled to the ground. The reptilian drew out a knife that appeared to made of bone. I raised my arm hoping to shield my face as it raised it’s blade. As it brought the knife down upon me I heard a blaster rifle go off at point blank range. The reptilian let out a shrill scream and fell on top of me. Using all my might I pushed the creature off to the side. I looked over and saw Jockey standing on the other side of the crash, blaster in hand. Grease was beside him. [CS-8675] - Jockey: You’re welcome. [CT-2497] - Lucky: So kind of you two to join the party. But I think I had the situation handled. Jockey: Sure you did ya ungrateful shit. I chuckled. Grease walked over to the reptilian and kneeled next to it. [CT-2313] - Grease: Tarasin. Native to this planet. He took the knife from the dead Tarsin’s hand and handed it to me. Grease: Take it. Souvenir. Lucky: Where’s Bolt? Jockey: I think I saw his pod come down a few clicks east of here. Gather whatever gear you can find and let’s move out in that direction. Once we find him we’ll head towards the Endurance crash site.

This Medical Supplies Near Me - mission-10-2-jungles-of-cularin on net.photos image has 1023x726 pixels (original) and is uploaded to . The image size is 131287 byte. If you have a problem about intellectual property, child pornography or immature images with any of these pictures, please send report email to a webmaster at , to remove it from web.