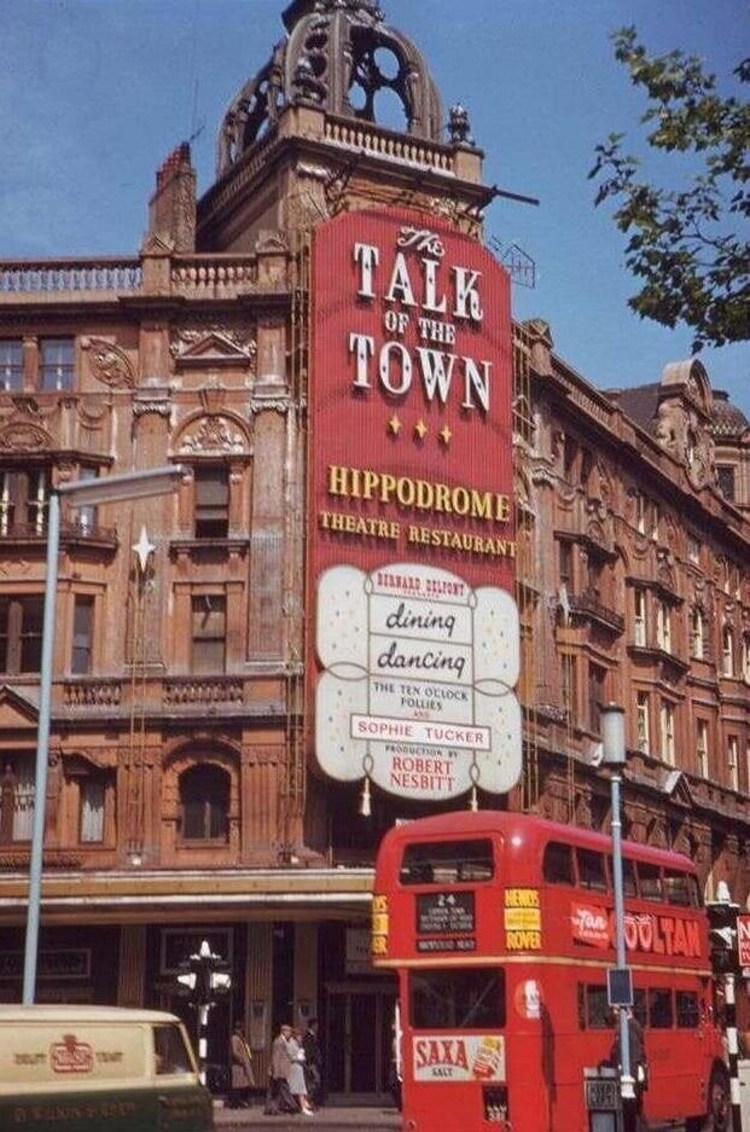 The Talk of the Town taken during the 1960s

The Hippodrome is a building on the corner of Cranbourn Street and Charing Cross Road in the City of Westminster, London. The name was used for many different theatres and music halls, of which the London Hippodrome is one of only a few survivors. Hippodrome is an archaic word referring to places that host horse races and other forms of equestrian entertainment. The London Hippodrome was opened in 1900. It was designed by Frank Matcham for Moss Empires chaired by Edward Moss and built for £250,000 as a hippodrome for circus and variety performances. The venue gave its first show on 15 January 1900,[1] a music hall revue entitled "Giddy Ostend" with Little Tich. The conductor was Georges Jacobi.[2] Entry to the venue was through a bar, dressed as a ship's saloon. The performance space featured both a proscenium stage and an arena that sank into a 230 ft, 100,000 gallon water tank (about 400 tons, when full) for aquatic spectacles. The tank featured eight central fountains, and a circle of fountains around the side. Entrances at the side of the auditorium could also be flooded, and used for the entry of boats.[3] Shows included equestrian acts, elephants and polar bears, and acrobats would dive from a minstrels' gallery above a sliding roof, in the centre of the proscenium arch. The auditorium featured cantilevered galleries, removing the columns that often obstructed views in London theatres, the whole was covered by a painted glass retractable roof, that could be illuminated at night.[3] The building included the headquarters of Moss Empires.[4] Theatre 1909–1951 In 1909, it was reconstructed by Matcham as a music-hall and variety theatre with 1340 seats in stalls, mezzanine, gallery and upper gallery levels. It was here that Tchaikovsky's Swan Lake received its English première by the Ballets Russes in 1910. The Albert de Courville revues were performed here from December 1912. The Hippodrome hosted the first official jazz gig in the United Kingdom, by the Original Dixieland Jazz Band, in 1919.[5] Its reputation was for revue and musical comedy, among them The Five O'Clock Girl, the West End production of Vincent Youmans' hit Broadway musical Hit The Deck (1928) and also Mr. Cinders, both in 1929; Ivor Novello's Perchance to Dream in 1945 with Margaret Rutherford; and the revue High Spirits in 1953 with Cyril Ritchard and Diana Churchill. Julie Andrews made her stage debut here at the age of 12. From 1949 to 1951 it was the London equivalent of the Folies Bergère. The Talk of the Town The original interior was demolished in 1958, and Bernard Delfont had the Hippodrome converted into the nightclub The Talk of the Town. It featured appearances by many of the popular artistes of the time,[6] including Diana Ross & The Supremes, Judy Garland,[7] Eartha Kitt, Shirley Bassey,[8] The Temptations,[9] Frank Sinatra, Mel Torme, Sammy Davis Jr., Lena Horne, Sergio Franchi, Sophie Tucker, Engelbert Humperdinck, Val Doonican, Lonnie Donegan, The Carpenters, John Denver, Ella Fitzgerald, Liza Minnelli, Tom Jones, The Jackson 5, Buddy Rich, Lulu, Danny La Rue, Cilla Black, Petula Clark, Paul Anka, Glen Campbell, Anne Murray, Sandie Shaw, Johnnie Ray, Matt Monro, The Andrews Sisters, Dolores Gray, Frankie Vaughan, Cliff Richard, The Shadows, Channing Pollock (magician), Dionne Warwick, Raphael, The Seekers, Stevie Wonder, Sacha Distel and Neil Sedaka. In February 1964, Ethel Merman made her only British appearance in a season of cabaret. Dusty Springfield recorded a TV special at the venue, broadcast 15 February 1968 on BBC2 Show of the Week: Live at the Talk of the Town.[10] The Seekers' final concert was recorded for the album The Seekers Live at The Talk of the Town in July 1968. Tony Bennett set his 1972 series for Thames Television, Tony Bennett at the Talk of the Town, there. This form of entertainment, in its turn, fell out of public favour, and the venue closed in 1982. In 2009, the Hippodrome was named by the Brecon Jazz Festival as one of 12 venues which had made the most important contributions to jazz music in the United Kingdom.[5] The musical drama End of the Rainbow, nominated for a number of Olivier Awards in 2011 during its London run and Tony Awards in 2012 while on Broadway, is set at the Talk of The Town during a Judy Garland engagement there near the end of her life. Wikipedia

This Matt Carpenter - the-talk-of-the-town-taken-during-the-1960s on net.photos image has 621x937 pixels (original) and is uploaded to . The image size is 145842 byte. If you have a problem about intellectual property, child pornography or immature images with any of these pictures, please send report email to a webmaster at , to remove it from web.