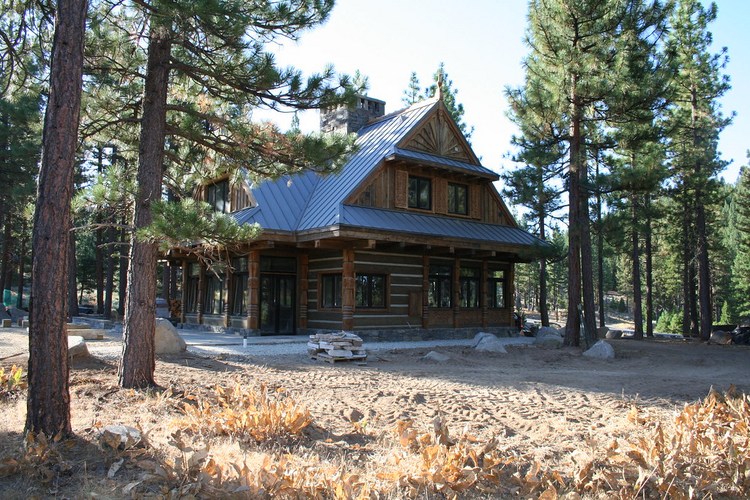 As far back as the 14th century massive roofs of houses in the Northern Dvina River Region of NW Russia were topped with an entire larch log, its roots hanging over the pediment of the house. From the root ball Russian carpenters used an axe to carve sculptures, often in the shape of a hen or a horse. These were called "okhlupen" and had the function of protecting inhabitants of the house from illnesses, thieves, fires and evil forces. There was a saying in the north of Russia, "Kuritsa na krishe, v dome tishe." "With a hen on the roof, it's quiet at home." Zakopane in the Sierras Architecture from "the LAND of the BLUE EYES". My lifelong thanks to my three Viking buddies from University of Montana... Arnstein Rustberggard of Gol, Claus Urbye of Oslo, and Jan Brentebratten of Chicken Falls (Honefoss) for teaching me how to love all things NORGE !!! Thanks goes out to my dear friend and business associate, Herr Gunter Kugler of Bremen who has faithfully guided us through much of this building project. From his vast knowledge in wood technology, to his love for the historical aspects of construction, from the Vikings to the Hansa Federation to his knowledge of construction in wood and other natural products.... he has helped our team develop this architectural style known as "from the LAND of the BLUE EYES". I look forward to our "first Cuban" and glass of Trockenbeerenauslese overlooking the 14th.... We began with a simple Carpathian Alps design known as Zakopane Style, after the alpine village of the same name in the podhale (alpine area) along the Polish/Slovakian border. From there we added architectural accoutrements covering a historical period from 1050AD to approximately 1920, in the modern age. We have incorporated door portals and shutter carvings from the old Stavkirke (Stave Churches) of Hallingdal, Telemark, and Urnes (Norway)... to roof details from the Novgorod/upper Dvina River Region of NW Russia... to window carvings from the old Prussia/Bohemian regions...... carved doors reminiscent of the Baltics, and various other folk details from the Hutsells of Ukraine and the goral (mtn people) in Poland. This is Phase 1 of a larger compound to incorporate inspiration from European architecture as well as many such inspirations in our own High Sierras. Sites such as Vikingsholm at Lake Tahoe, the Hearst compound at Wyntoon, Rainbow Lodge, Sugarbowl, and Thunderbird Lodge. Architect: Larry Pearson, PEARSON DESIGN GROUP, Bozeman, Montana www.pearsondesigngroup.com Master Builder: Matt & Ted Williams, WILLIAMS CONSTRUCTION, Clio, California www.williamsconstructionca.com

This Matt Carpenter - high-sierra-architecture on net.photos image has 1024x683 pixels (original) and is uploaded to . The image size is 343685 byte. If you have a problem about intellectual property, child pornography or immature images with any of these pictures, please send report email to a webmaster at , to remove it from web.