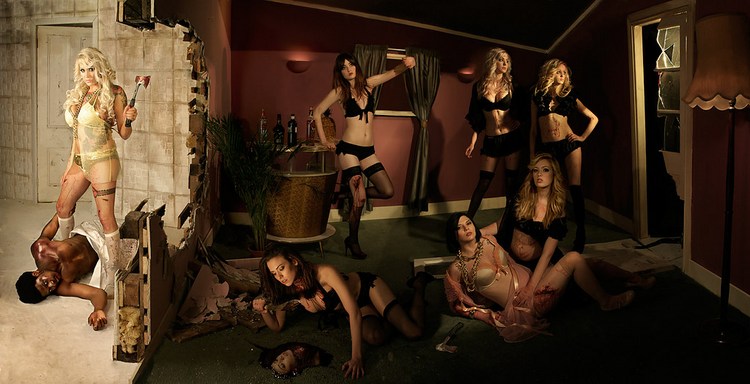 less crazy yellow version on my site- View a bit bloody bigger but updates coming on the garage one asap. Okay so this was a very personal project that just grew and grew until the whole Garage Studios crew and many others where all onboard, working tirelessly and for free for many hours to get this image out. This started out as a double page for a new magazine, never one to do things in small steps I tried to get something completely new and unique to them. So the Models from Left to Right, SJ, Bukki, Sally, Elin, Kelly (aka Toots Von Fury), Alice (holding Kelly) and Sophie and Sophie. So I sort of had this in my head for a while- although this is a much more toned down version of the mayhem. You might wanna know why you might not, so I’ll keep this fairly short and then if you want more you can get to the DarkDaze blog. If you want the technical info, and yeah theres enough geeks out there then you can get that on the Garage Studios blog. The idea came from some religious painting that I am beginning to get stupidly obsessed with, and the hideous nightmares that I can never seen to break out of- although they don’t always have hot girls in them- normally its just some hella bad stuff. A lot of this is taking Caravaggio’s amazing lighting as a starting point, via the interior of my favourite house, of my favourite scene of the greatest movie ever. (sorry Avangelist). The set was built almost entirely by Matt (the Garage Studios Art Director) and Laurie (a carpenter, who worked for Aardman) on No Budget at all. We were helped by Avangelist, Nicholas Blake, Ben Petrucci, all Styling and Clothes By Ophelia Fancy, (with help on set from Louie Banks and Eleni Mettyear), all produced by Studio Manager Adam Bronkhorst, with Lighting and all round saving-the-day attitude from Natasha Alipour, (who ran a crew of peeps all day, brillaintly) but concept, lighting schemes, shot, post work, all by DD. Plus huge shout to Matt (when I nearly ditched it) and Emma who sat with me when I was tearing my hair out all Saturday night last week that it wouldn’t work. Okay heres the proper role call of peeps that made this work. Lighting Technician and my Assistant, plus general sanity preserver www.flickr.com/photos/[email protected]/ First Assistant www.flickr.com/photos/theavangelist/ Additional Assistance and set work from www.flickr.com/photos/ben_petrucci/ www.flickr.com/photos/nicholasblakephotography/ Set Construction M.Halls (Garage Studios.co.uk) and Laurie Wilson. with help from those above and Emma Sandham-King Styling by Ophelia Fancy, www.opheliafancy.com with some help on set from www.flickr.com/photos/louiebanks/ www.flickr.com/photos/[email protected]/ Behind scenes stills (coming soon) by www.flickr.com/photos/vickeh/ Production Adam Bronkhorst (Garage Studios.co.uk) Mad love for the models who sat in make-up for hours and hours for a one shot shoot. www.garage-studios.co.uk stop motion video ting what you make of that then Chad? ;)

This Matt Carpenter - -even-when-i-look-down-at-my-hands-i-cant-seem-to-wake-up- on net.photos image has 1024x524 pixels (original) and is uploaded to . The image size is 161047 byte. If you have a problem about intellectual property, child pornography or immature images with any of these pictures, please send report email to a webmaster at , to remove it from web.