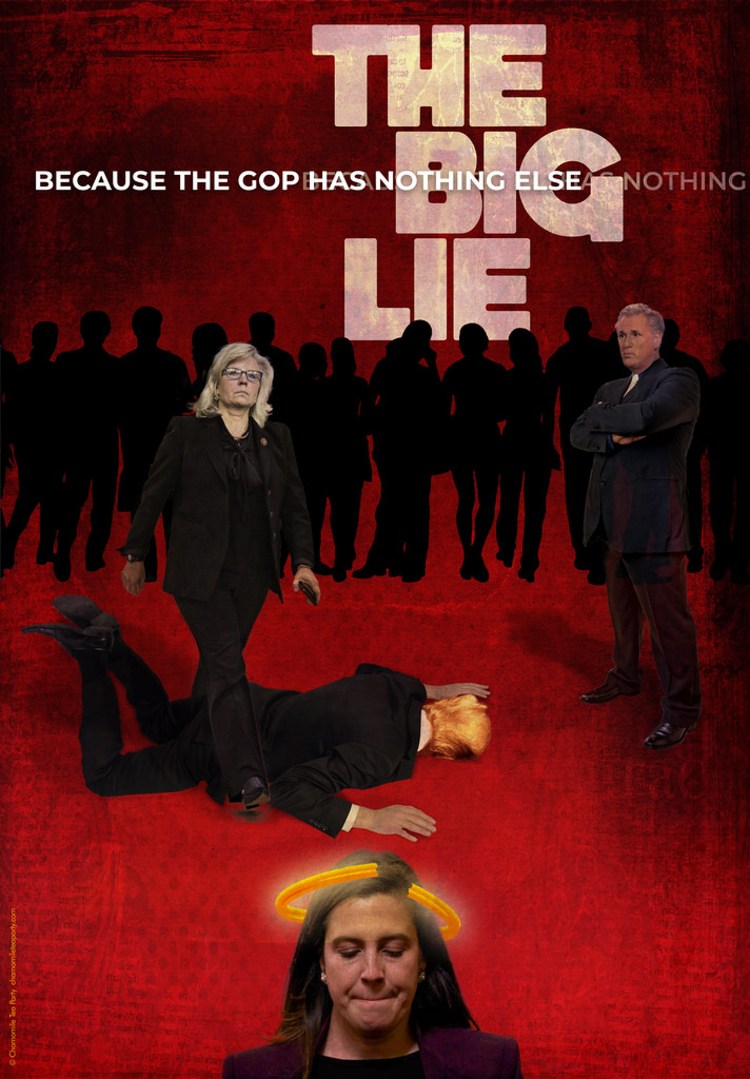 The endgame for GOP House Minority Leader Kevin McCarthy is power. This is nothing new for the Republican Party. In 2010, on the eve of midterm elections, Senate Majority Leader Mitch McConnell said, "The single most important thing we want to achieve is for President Obama to be a one-term president." I've been documenting this Republican focus via my posters for over a decade. The GOP was the party of "No." Republicans just wanna win! Eleven years later, McConnell repeated this strategy: "He is '100 percent' focused 'on stopping' President Joe Biden's administration." The GOP's number one priority is winning elections, not governing or making life better for Americans, just winning. And that's exactly McCarthy's plan for the 2022 midterms. Despite all evidence to the contrary, he sees Trump and his false claim to the presidency as the paving stones to that end. He doesn't believe Trump won the election. He believed he was responsible for the insurrection. He said so. Until he recanted. All in the name of unity. And winning. But then Wyoming's Republican Representative Liz Cheney refused to go along with the charade. In a Washington Post op-ed, she stated, "We Republicans need to stand for genuinely conservative principles, and steer away from the dangerous and anti-democratic Trump cult of personality. In our hearts, we are devoted to the American miracle. We believe in the rule of law, in limited government, in a strong national defense, and in prosperity and opportunity brought by low taxes and fiscally conservative policies." The price for her insolence was ouster from her position as Republican Conference Chair, the third highest-ranking position in her party's House leadership. No matter her conservative bonafides: small government, low taxes, and most pertinent to this situation, a reverence for the law. And Donald Trump was not a law-abiding president. Not only did she say that right after the insurrection of January 6, but she continues to say it now, while the vast majority of Republican lawmakers have chosen to forget it. After the voice vote for her removal, Trump chimed in with his typical invectives: "Liz Cheney is a bitter, horrible human being. I watched her yesterday and realized how bad she is for the Republican Party. She has no personality or anything good having to do with politics or our Country," he said in a statement. "She is a talking point for Democrats, whether that means the Border, the gas lines, inflation, or destroying our economy. I look forward to soon watching her as a Paid Contributor on CNN or MSDNC!" The twice impeached former president is the voice of the Republican Party now. Her replacement: New York Representative Elise Stefanick. Stefanick is much more moderate than Cheney. The American Conservative Union and the Heritage Action group rate Cheney as aligning with their conservative agenda more than Stefanick. Yet, Stefanick has Trump's support. While Cheney's expulsion cemented Trump's leadership, is the enemy of our enemy our friend? Is she, as The New York Times' Frank Bruni wondered, a martyr? As the Times' Maureen Dowd said, "If Liz Cheney wants to be in the business of speaking truth to power, she's going to have to dig a little deeper." She is, after all, a Cheney. She supported her father's (former Vice President Dick Cheney) rationale for invading Iraq during the G.W. Bush Administration and, in doing so, played on Americans' fears after 9/11. She supported waterboarding, refusing to call it torture. She downplayed Obama's birther supporters. And she is decidedly against gay marriage even though her sister is a lesbian, happily married, and with children. Trump reiterated her family heritage: "She is a warmonger whose family stupidly pushed us into the never-ending Middle East Disaster, draining our wealth and depleting our Great Military, the worst decision in our Country's history." So, what do we owe Liz Cheney? For right now, her voice is the tenuous thread (along with fellow representative Adam Kinzinger and a few others) to a union envisioned by our founders. I'm not too comfortable hanging onto that thread. The Republican's "big lie" is too heavy a weight. GOP, we don't even know you anymore. Feel free to pass this poster on. It's free to download here (click on the down arrow just to the lower right of the image). See the rest of the posters from the Chamomile Tea Party! Digital high res downloads are free here (click the down arrow on the lower right side of the image). Other options are available. And join our Facebook group. Follow the history of our country's political intransigence from 2010-2020 through a seven-part exhibit of these posters on Google Arts & Culture.

This Liz Cheney Father - the-big-lie on net.photos image has 712x1024 pixels (original) and is uploaded to . The image size is 216143 byte. If you have a problem about intellectual property, child pornography or immature images with any of these pictures, please send report email to a webmaster at , to remove it from web.