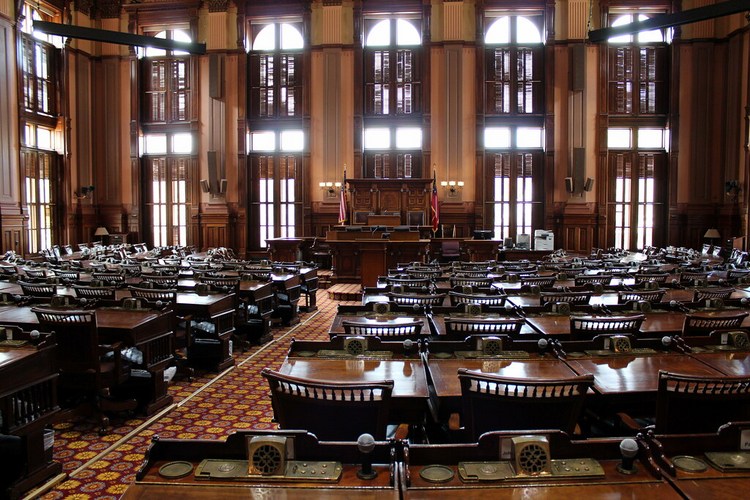 The Georgia State Capitol, located at 206 Washington Street SW, was constructed from 1883 to 1889 to the design by Willoughby J. Edbrooke and Franklin P. Burnham of Chicago. Prior to 1868, Georgia's capitol sat in Savannah, Augusta, Louisville and Milledgeville. The capitol building, which sits on a five acre property occupied previously by the first Atlanta City Hall, highlights the democratic ideal of transparency in government with its wide open spaces and large windows. The offices of the governor, lieutenant governor and secretary of state are on the second floor. The third floor houses the General Assembly, or the legislative chambers--the 180-member House of Representatives, and the 56-member Senate. The fourth floor features visitors' galleries and the Georgia Capitol Museum. Designed in the Neo-Classical Renaissance Revival style, the gold domed capitol building's façade is dominated by a four-story, heroic portico, with a stone pediment supported by six columns in the composite order and six rusticated piers. Above the portico rises a dome and lantern covered with Georgia gold leaf, topped by a female statue of Freedom holding a lantern that reaches 237 feet high. Georgia marble was used for the interior floors, steps, and a facing for walls. Under the rotunda is a Hall of Fame with marble busts of the Georgia signers of the Declaration of Independence, as well as other notable citizens from the past. National Register #71001099 (1971)

This Is Independence Hall Open - atlanta-downtown-georgia-state-capitol-house-chamber on net.photos image has 1024x683 pixels (original) and is uploaded to . The image size is 256247 byte. If you have a problem about intellectual property, child pornography or immature images with any of these pictures, please send report email to a webmaster at , to remove it from web.