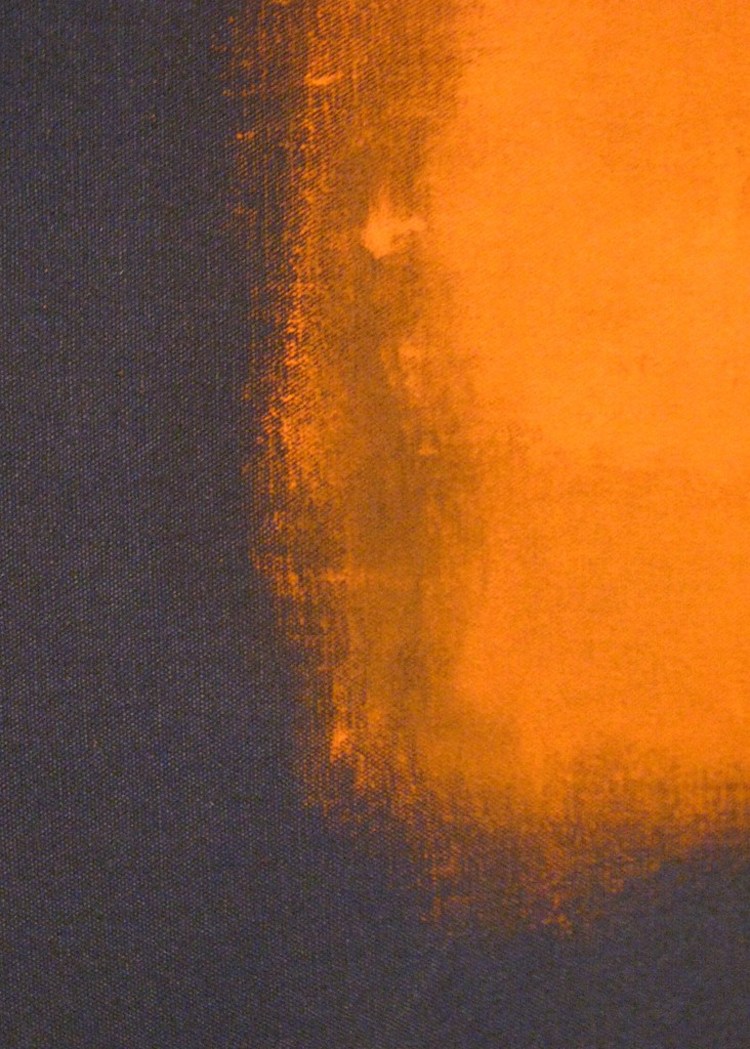 Detail of "Brown, Orange, Blue on Maroon", by Mark Rothko

Brown, Orange, Blue on Maroon en.wikipedia.org/wiki/Mark_Rothko Mark Rothko, born Marcus Rothkowitz (September 25, 1903 – February 25, 1970), was a Russian-born American painter. He is classified as an abstract expressionist, although he himself rejected this label, and even resisted classification as an "abstract painter". . . . At some point during the winter of 1948, Rothko happened upon the use of symmetrical rectangular blocks of two to three opposing or contrasting, yet complementary, colors, in which, for example, "the rectangles sometimes seem barely to coalesce out of the ground, concentrations of its substance. The green bar in "Magenta, Black, Green on Orange", on the other hand, appears to vibrate against the orange around it, creating an optical flicker." Additionally, for the next seven years, Rothko painted in oil only on large canvases with vertical formats. Very large-scale designs were used in order to overwhelm the viewer, or, in Rothko’s words, to make the viewer feel "enveloped within" the painting. For some critics, the large size was an attempt to make up for a lack of substance. In retaliation, Rothko stated: “I realize that historically the function of painting large pictures is painting something very grandiose and pompous. The reason I paint them, however . . . is precisely because I want to be very intimate and human. To paint a small picture is to place yourself outside your experience, to look upon an experience as a stereopticon view or with a reducing glass. However you paint the larger picture, you are in it. It isn’t something you command!” He even went so far as to recommend that a viewer position themselves as little as 18 inches away from the canvas so that the viewer might experience a sense of intimacy, as well as awe, a transcendence of the individual, and a sense of the unknown. Many of the "multiforms" and early signature paintings display an affinity for bright, vibrant colors, particularly reds and yellows, expressing energy and ecstasy. By the mid 1950’s however, close to a decade after the completion of the first "multiforms," Rothko began to employ dark blues and greens; for many critics of his work this shift in colors was representative of a growing darkness within Rothko’s personal life. The general method for these paintings was to apply a thin layer of binder mixed with pigment directly onto uncoated and untreated canvas, and to paint significantly thinned oils directly onto this layer, creating a dense mixture of overlapping colors and shapes. His brush strokes were fast and light, a method he would continue to use until his death. His increasing adeptness at this method is apparent in the paintings completed for the Chapel. With a total lack of figurative representation, what drama there is to be found in a late Rothko is in the contrast of colors, radiating, as it were, against one another. His paintings can then be likened to a sort of fugal arrangement: each variation counterpoised against one another, yet all existing within one architectonic structure. en.wikipedia.org/wiki/Cincinnati_Art_Museum

This Intimacy During Fasting - detail-of-brown-orange-blue-on-maroon-by-mark-rothko on net.photos image has 732x1024 pixels (original) and is uploaded to . The image size is 196328 byte. If you have a problem about intellectual property, child pornography or immature images with any of these pictures, please send report email to a webmaster at , to remove it from web.