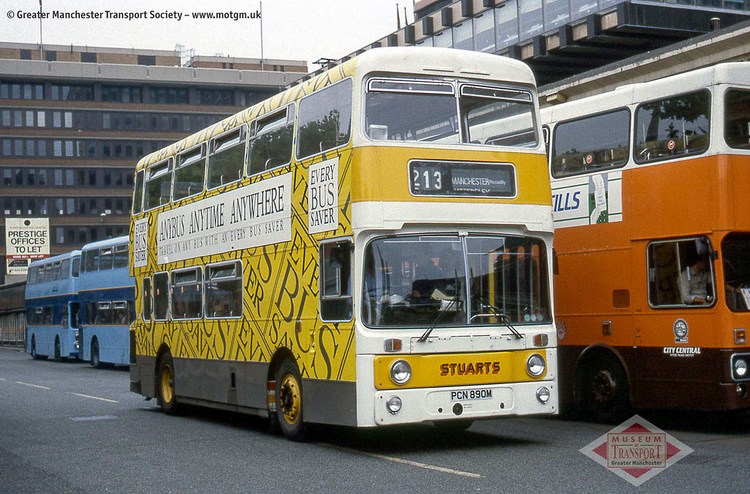 Outside London, bus deregulation in 1986 was a hand grenade going off for the industry. Since the Road Traffic Act 1930, the whole of the the UK bus network was built around cooperation, cordination and the notion of 'territories' wthin which bus companies were designed to be benevolent monopolies. This meant stability, and some would say it also stifled the imagination and innovation that competition - the fear of being out of a job if you weren't god enough for the market - should bring. So the Transport Act 1985 flipped the bus industry outside London on its head, with competition at the heart of the new approach. Many new entrants to the market arrived, and Greater Manchester's streets that had been a sea of orange (in bus terms) were suddenly a rainbow of bus company liveries. The new era brought new ideas such as minibuses to serve smaller estates, plus more frequent buses on really busy routes and some very 'off the wall' ideas such as a direct express service from little Culcheth between Leigh and Warrington, to Manchester. It also brought fewer buses to quiter routes and framentation of what had been an integrated network. Suddenly, if you had a season ticket for company A but the first bus to arrive at the stop was from company B, hard luck - wait, or pay again. At the centre of the melee was Greater Manchester Passenger Transport Executive, which had shed its bus operating powers but became the coordinating body for public transport in the region, subsiding non-commercial services; funding concessionary travel; and looking after bus stations and bus stops, among other things. One of the key issues was ticket interchangeability - the pre-1986 system had made us of Clippercard, Saver Seven and so on. So GMPTE introduced the 'Every Bus Saver' a season ticket that was valie on almost all bus services in Greater Manchester no matter who operated the bus. To help launch the campaign, local operators all painted a bus in a special advertising livery that had the same design but on a base colour that reflected the owning company. Stuart's of Hyde used yellow as its main colour, so we see their PCN890M in Piccadilly bus station alongside vehicles from competitors GM Buses and Citibus. Every Bus Saver didn't last long, and nor did Stuart's - it disappeared in the 1990s. If you'd like to know more about the Museum of Transport Greater Manchester and its collection of vintage buses, go to www.motgm.uk. © Greater Manchester Transport Society. All rights reserved. Unauthorised reproduction is strictly prohibited and may result in action being taken to protect the intellectual property interests of the Society.

This Innovation Centre London - independence-competition-collaboration on net.photos image has 1024x675 pixels (original) and is uploaded to . The image size is 298140 byte. If you have a problem about intellectual property, child pornography or immature images with any of these pictures, please send report email to a webmaster at , to remove it from web.