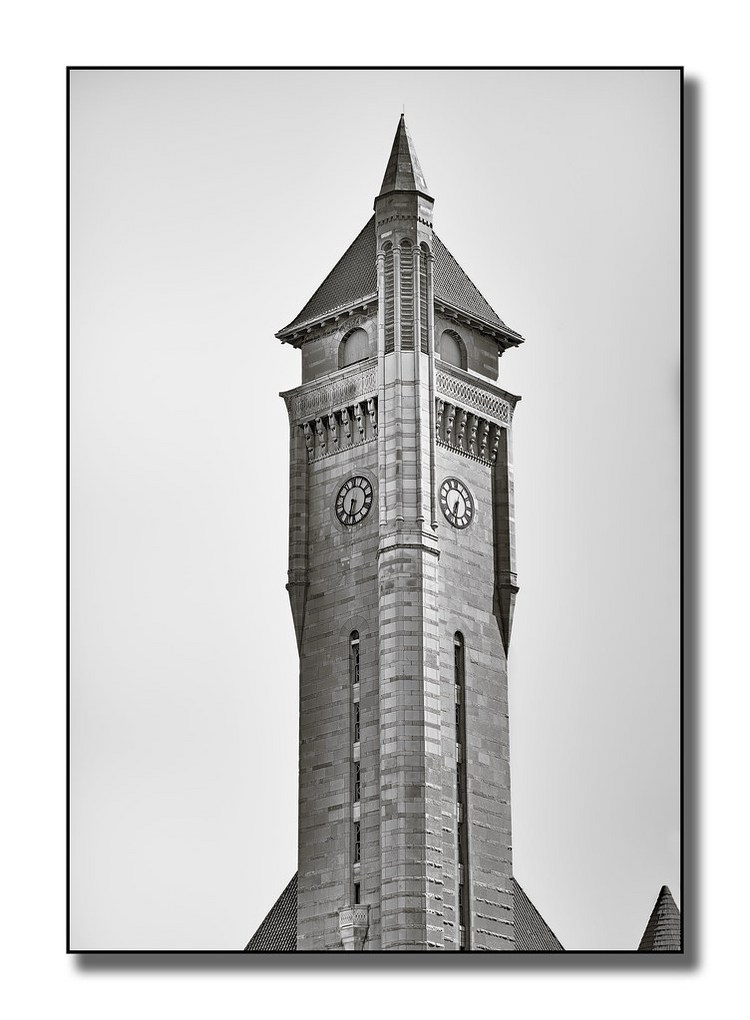 Standing 280 feet high, the clock tower at Union Station located on Market Street in downtown St. Louis, Missouri, was completed in 1894. Designed by the St. Louis firm of Theodore C. Link, the tower and the 600 foot long adjoining hotel are constructed of Bedford limestone in the "Romanesque" style with medieval revival elements. The four-story hotel and clock tower conceal from view along Market Street the 600 foot wide, 630 foot long, and 74 foot high steel train shed that remains to this day the largest single-vault trainshed erected in the United States, covering 32 tracks -- the largest number of any American railroad station at the time. The total cost of the construction, including acquisition of the site, construction of the station, the trainshed, the hotel, trackage, and other improvements, was $6,500,000. In 1943, about 100,000 people a day passed through Union Station and more than 200 passenger trains daily moved in and out of the great trainshed. At its height, the station combined passenger services of 22 railroads, the most of any single terminal in the world. The famous photograph of Harry S. Truman holding aloft the erroneous Chicago Tribune headline, "Dewey Defeats Truman", was shot at the station as Truman headed back to Washington, D.C., from Independence, Missouri, after the 1948 Presidential election. However, by the 1970s, as air flight became the preferred method of long-distance travel, railroad passenger services declined significantly. The final passenger train departed on October 31, 1978, at 11:38 p.m. In 1981, the disused Grand Hall was used in John Carpenter's movie “Escape from New York,” doubling for Madison Square Garden during the film's gladiatorial fight. In August of 1985, Union Station was re-opened after undergoing a $150 million renovation designed by HOK, which included a 539-room hotel, shopping mall, restaurants and food court. The renovation remains one of the largest adaptive re-use projects in the United States. Unfortunately, its success was limited. By the early 2000s the shopping mall, restaurants and food court were failing and mostly abandoned. Numerous proposals for re-energizing Union Station were proposed. Ultimately, in 2016, Lodging Hospitality Management announced plans to once again renovate Union Station, this time to include a 120,000-square-foot, $45 million aquarium which is scheduled to open in late 2019. The hotel remains in operation as a Curio Collection hotel operated by Hilton. The station was designated a National Historic Landmark in 1970, as an important surviving example of large-scale railroad architecture from the late 19th century. © All rights reserved - - No Usage Allowed in Any Form Without the Written Consent of the photographer, Mark S. Schuver. The best way to view my photostream is on Flickriver: Nikon66's photos on Flickriver

This Independence Mall Food Court - st-louis-union-station-clock-tower on net.photos image has 752x1023 pixels (original) and is uploaded to . The image size is 100367 byte. If you have a problem about intellectual property, child pornography or immature images with any of these pictures, please send report email to a webmaster at , to remove it from web.