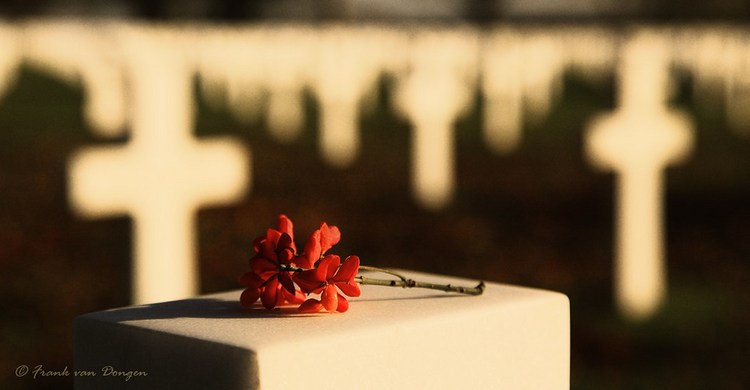 My Tribute © 2013 Frank van Dongen FB | 500px | FLICKEFLU | WERKAANDEMUUR | My Website | Getty Images +++++++++++++++++++++++++++++++++++++++++++++++++++++++++ The World War II Netherlands American Cemetery and Memorial is a war cemetery which lies in the village of Margraten six miles (10 km) east of Maastricht, in the most southern part of the Netherlands. It is administered by the American Battle Monuments Commission. The tall memorial tower can be seen before reaching the cemetery which covers 65.5 acres (26.5 ha). From the cemetery entrance the visitor approaches through the Court of Honor with its pool reflecting the chapel tower. The visitors' building is on the right and the museum with its three engraved operations maps describing the achievements of the American Armed Forces in the area during World War II is on the left. At the base of the tower facing the reflecting pool is a statue representing the grieving mother of her lost son. The walls on either side of the Court of Honor contain the Tablets of the Missing on which are recorded the names of 1,722 American missing who gave their lives in the service of their country and who rest in unknown graves. Beyond the chapel and tower is the burial area which is divided into sixteen plots. Here rest 8,301 American dead, most of whom lost their lives nearby. Their headstones are set in long curves. A wide tree-lined mall leads to the flag staff which crowns the crest. Each year on Memorial Day (28 May) the dead are commemorated. In 2005, president Bush attended a large solemn meeting. It was for the first time that an American president visited the cemetery. The following quote is from a speech president Bush gave that day: "On this peaceful May morning we commemorate a great victory for liberty, and the thousands of white marble crosses and Stars of David underscore the terrible price we pay for that victory. For the Americans who rest here, Dutch soil provides a fitting home. It was from a Dutch port that many of our pilgrim fathers first sailed for America. It was a Dutch port that gave the American flag its first gun salute. It was the Dutch who became one of the first foreign nations to recognize the independence of the new United States of America. And when American soldiers returned to this continent to fight for freedom, they were led by a President (Roosevelt) who owed his family name to this great land." Official website: www.abmc.gov/cemeteries/cemeteries/ne.php

This Independence Mall Fight - not-forgotten-ww-ii-9-11 on net.photos image has 1023x532 pixels (original) and is uploaded to . The image size is 84661 byte. If you have a problem about intellectual property, child pornography or immature images with any of these pictures, please send report email to a webmaster at , to remove it from web.