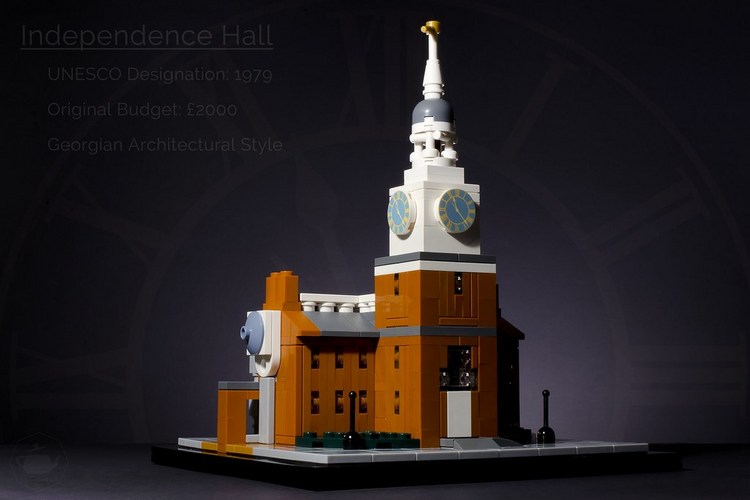 One of the most intensive builds I've ever done, both financially and structurally. The interior gymnastics required to support the exterior facade (including: correct amount of windows [count them!], the stone accents crossing the front of the building, and the roof overhang) was ridiculous; all on top of needing to seamlessly integrate the main building with the hyphens on either side, the clocktower, and the other little add-ons. This build took me months of planning and testing before it was finally built. The raw cost of this build also forced me to acquire parts slowly - lots of rare parts (sand blue radar dish, silver trophy, among others), a set of 1x1 dark orange plates that ran me over a dollar per unit, and custom-printed clockfaces (designed myself, printed by Brickengraver). All told, it was far more expensive than I'd like to admit to myself, but I couldn't be happier with the result. As some of you might know I'm a Philadelphia resident, and for three years up until recently, I lived just a few blocks from Independence Hall. This build is very close to me personally, and sometimes when I look at it, I can still hear the clocktower chiming the hour. Information from Wikipedia. Thank you to ArchBrick Daily for featuring this build! ©2015 Christopher Elliott, All Rights Reserved. Find me on: chriselliott.art | Facebook | Reddit

This Independence Hall Hours - independence-hall on net.photos image has 1024x683 pixels (original) and is uploaded to . The image size is 65958 byte. If you have a problem about intellectual property, child pornography or immature images with any of these pictures, please send report email to a webmaster at , to remove it from web.