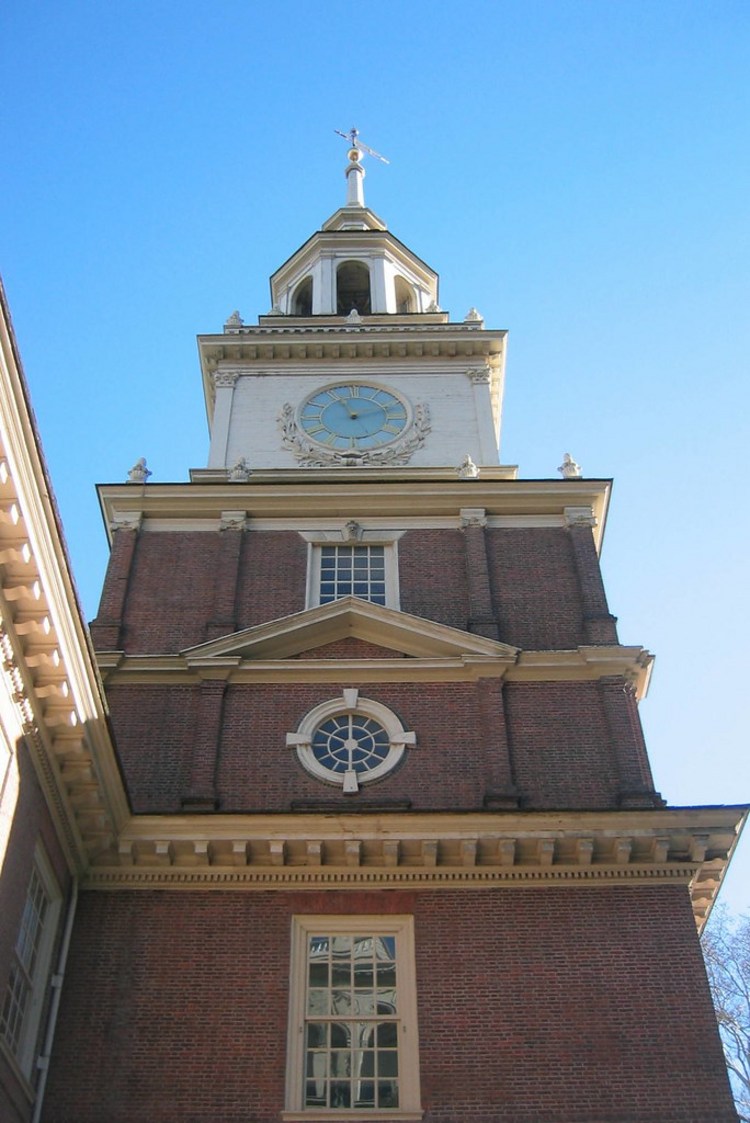 Independence Hall, on Chestnut Street between 5th and 6th Streets, was built by Edmund Woolley and Andrew Hamilton, the Speaker of the Pennsylvania Assembly, in 1753 as the Pennsylvania State House. But it was the events that took place between 1775 and 1787 that earned it the name Independence Hall, and reinforce its iconic status as the Birthplace of the Nation. It is within its walls that the delegates to the Second Continental Congress met, the Declaration of Independence was approved, and the Constitution of the United States was debated, drafted and signed. Construction on the redbrick Georgian style building, at the time the most ambitious public work in the colonies, began in 1732. The five-part plan included a 105-foot long main block, two covered arcades, and two 50-foot long wing buildings at the end of the arcades. The Provincial government paid for construction as it went along--piecemeal for 21 years. The building has undergone many restorations, notably by Greek revival architect John Haviland in 1830, and by a committee from the National Park Service, in 1950, returning it to its 1776 appearance. The bell tower, consisting of a wooden steeple set atop the three-story brick house, was the original home of the Liberty Bell and today holds the Centennial Bell, created for the United States Centennial Exposition in 1876. From 1775 to 1783, the Hall served as the principal meeting place of the Second Continental Congress, a body of a body of representatives from each of the thirteen colonies. The Declaration of Independence, which was authored by Thomas Jefferson and declared the unified colonies independent of the Kingdom of Great Britain, was approved there on July 4, 1776, though the vote was held two days earlier and the Declaration was read aloud to the public in the area now known as Independence Square. On June 14, 1775, delegates nominated George Washington as commander of the Continental Army; and on July 26, they appointed Benjamin Franklin the first Postmaster General of what would later become the United States Post Office Department. During September of 1777, Philadelphia was occupied by the British Army, and the Continental Congress was forced to abandon the State House and flee to York, Pennsylvania where the Articles of Confederation were approved in November. The Congress returned on July 2, 1778, after the end of the British occupation. In the summer of 1787, Independence Hall hosted the Philadelphia Convention, now also known as the Constitutional Convention. The original intent was to discuss adjustments to the Articles of Confederation, but the Convention decided to propose a rewritten Constitution, resulting in a new fundamental government design. On September 17, 1787, the Constitution was completed, and took effect on March 4, 1789, when the new Congress met for the first time in New York's Federal Hall. In 1790, the Congress moved back into Philadelphia and first met in Congress Hall, the small adjoining east east wing. Philadelphia would remain the seat of the federal government until 1800, with Independence Hall serving as the Capitol Building with executive offices, and the Supreme Court assembling in Old City Hall, the small adjoining west wing. These three buildings, together with Philosophical Hall, today make up Independence Square. Here the first foreign minister to visit the United States was welcomed; the news of Cornwallis's defeat was announced, signaling the end of the Revolutionary War; and, later, John Adams and Abraham Lincoln lay in state. On October 26, 1918, Tomáš Masaryk proclaimed the independence of Czechoslovakia on the steps of Independence Hall. On July 4, 1962, President John F. Kennedy gave an address here on Independence Day. Independence Hall is pictured on the back of the U.S. $100 bill, as well as the bicentennial Kennedy half dollar. The Assembly Room is pictured on the reverse side of the U.S. two dollar bill, from the original painting by John Trumbull entitled Declaration of Independence. Independence National Historical Park preserves several sites associated with the American Revolution. Administered by the National Park Service, the 45-acre park was authorized in 1948, and established on July 4, 1956. Independence Hall was designated a World Heritage Site on October 24, 1979. Independence National Park Historic District National Register #66000675 (1966)

This Independence Hall Half Dollar - philadelphia-independence-hall on net.photos image has 684x1024 pixels (original) and is uploaded to . The image size is 150947 byte. If you have a problem about intellectual property, child pornography or immature images with any of these pictures, please send report email to a webmaster at , to remove it from web.