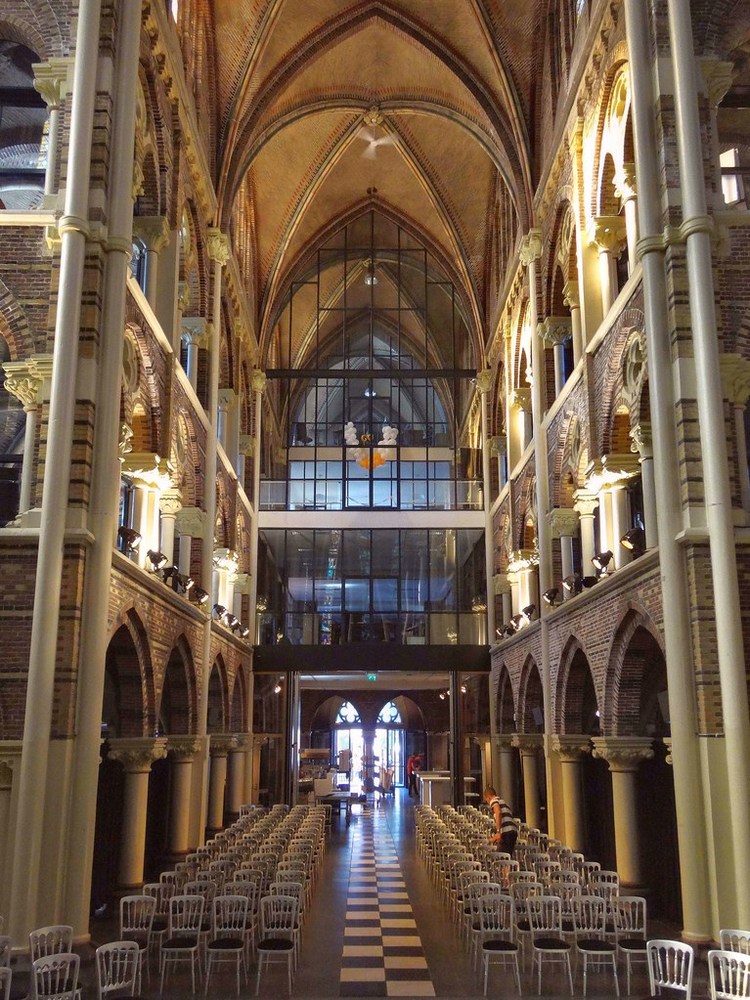 "My harp also is turned to mourning, and my organ into the voice of them that weep" reads the Old-Testament book of Job 30, 31, in the King James Version. This photo was taken from what was once the high altar of the Posthoorn Church towards the organ loft. Sadly no organ there today, only pretty sky-blue. I'd walked by the former church many times but it was always closed until my good fortune this weekend. Entering I saw a beautifully restored neo-gothic building; no longer a church but a venue for cultural happenings, fancy dinners, and fashionable weddings. Very different from the heyday of neo-gothic catholic architecture of the second half of the nineteenth century. In the face of a strong Protestant protest, the Dutch government allowed the restoration of the Catholic Church hierarchy in 1853. For several centuries catholicism had been suppressed if not actively persecuted in the wake of the Reformation and the Dutch war of independence from the Catholic Habsburg Empire. After 1853, Catholic religious, social-political and cultural life quickly came under steam. So-called 'clandestine' churches ('schuilkerken') could now be given up for public buildings, resulting in a blossoming of catholic ecclesiastical architecture. One of the leading architects of this movement was Pierre Josephus Hubertus Cuypers (1827-1921). He designed this neo-gothic church and it was built between 1861 and 1889. Initially it was equipped with the organ from the 'Schuilkerk' The Posthoorn; but in 1928 there was enough money to engage the organ building firm of Jos. H. J. Vermeulen (1876-1946) (Weert-Alkmaar) to build a new King of Instruments for this Church of the Immaculate Conception. In the 1970s church attendance fell back and the church was closed down as a church after 1976 but hosted concerts until 1979. Then It fell into disrepair, and vandalism destroyed the fine organ. There was a public outcry, and plans to tear the building down were scrapped. Instead it was restored (starting in the mid-80s) into its present state and for modern purposes such as concerts. Gazing upon that empty organ loft, I remembered Job's lament. The King James Version has 'organ' for the Hebrew word which in fact means some kind of reed pipe ('uggab). Organs as we know them the ancient Hebrews did not have.

This Independence Hall Facts - uggaban-silence-former-posthoorn-church-of-the-immaculate-conception-haarlemmerstraat-amsterdam-the-netherlands on net.photos image has 767x1023 pixels (original) and is uploaded to . The image size is 254355 byte. If you have a problem about intellectual property, child pornography or immature images with any of these pictures, please send report email to a webmaster at , to remove it from web.