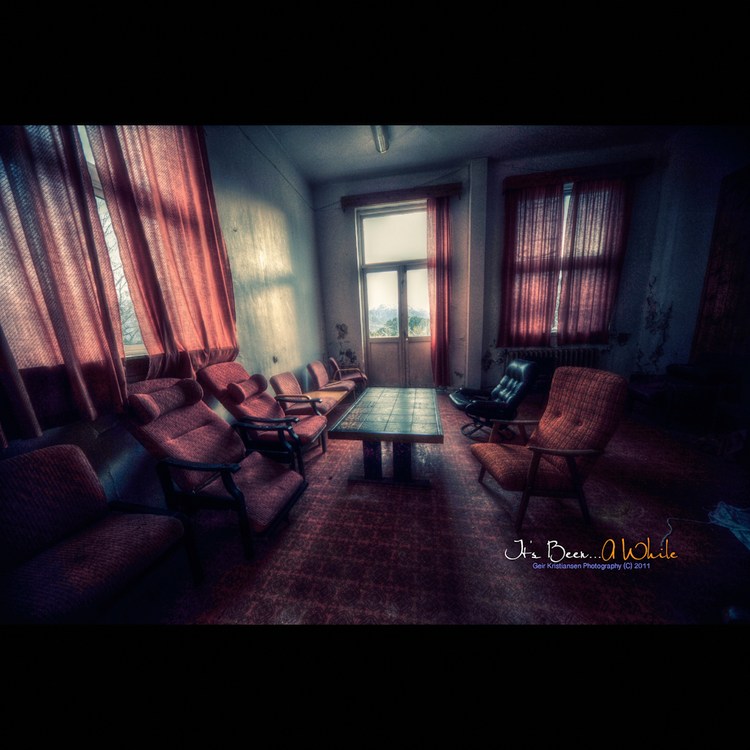 …since last time there was a lively conversation around this table. Taken at an abandoned sanatorium I recently visited. This old sanatorium was built by St. Jorgen Foundation in Bergen. It should serve as a tuberculosis hospital for the West Coast. Most patients came from the Bergen region, but there were patients from all over the country. The sanatorium was in operation until mid 1950's. The background for building the sanatorium here was said to be it's dry climate, pine forest and the thin mountain air. It was a recipe believed in the old days to cure people with tuberculosis. On this location they found a whole "package" - it was located on a hill and in a climate that one at the time considered "immune zone" against the disease. In the year 1900, the plans for the sanataorium was ready. The three story hospital would have 96 beds and modern spa and operating room. An extension was made in 1924 and the capacity increased to 120 beds, and by 1950 it had reached 150 beds. The construction plan in 1900 included also a separate laundry, stable and icehouse - and not least an electrically driven cable car from the steamship pier at the fjord and up to "rock shelf". It should also be built a 6 km stretch of road with 13 bends up the hill. The cable car and the power plant to the sanatorium are located in side buildings next to the sanatorium. Calculations showed that the large hospital facility would cost 456,000 norwegian kroner (approx. 76000$ - an enormous sum in those days. Most of the money was acquired in Bergen: Bergen city guaranteed for 200,000 kroner, and wealthy citizens for 175,000 kroner. The final amount turned out to be 777,000 thousand kroner when the plant was inaugurated on 2 in November 1902. On the opening party there was greeting telegrams from both the Swedish-Norwegian King and Queen, Parliament President Carl Werner and shipowner and later Prime Minister Johan Ludwig Mowinckel. Some years later, it was also built senior housing, two family dwellings for the stoker and the gardener, and "sister house" for nurses. there were also a separate chapel with mortuary. The first treatment they had to offer - before the vaccine against the disease came after World War II - was partly operations - partly different cures. One of the cures they used here was making sure the patients got enough air daily. Meaning they would lay outside in their beds in both in summer and winter, well-packaged in bags of reindeer skins. They were placed under a huge canopy along the entire south wall and this canopy prevented rain and snow to enter in their air spaces. Around the hospital there was built a large park with roads where patients who were strong enough could exercise. Another cure they used was known as 'Blowing of the lungs'. This took place inside the 'operation lodge'. The technique comprised much of the so-called "blowing". When tuberculosis attacked the lungs, it would eat the tissue, consume it so that it formed large cavities in the lung tissue. It was essential to close these cavities. This was done by puncturing the lung where the cavities had formed so that sick lung would collapse and the wounds would be healed exactly where the cavities formed. Patients here was almost fat on the heavy diet and the hospital had its own pig barn where they made sure that the pigs had an extra thick blubber layer before they were slaughtered. And it was also quite common for relatives to send food and treats in abundant quantities Every July a rich man in Bergen would send a cargo of oranges to patients and staff. The distance down to the village, the risk of getting infected and the fact that most patients were visitors, not locals - turned this place into a rather secrete and closed society. The sanatorium even had its own post office and therefore the people here would establish a separate social life. The whole complex was built in 1902 so that women and men were strictly separated. There were two bed suites, operation and cure rooms and separate dining rooms for each of the sexes. This separation of the sexes was kept strict up to a major rebuild that was done in 1937. Although there were strict gender segregation indoors, it was allowed for girls and boys to come together on the romantic paths in the park, as well as in the decorated assembly hall when it was organized parties, cinema, concerts or theater. Most of the patients here was young people, and those who were fit enough, would take part part in simple sports activities and games in the park outdoors. It was founded to concerts, and patients set up plays every New Year's Eve and may 17.(Norways independence day) And, after a rich shipowner and other rich people in Bergen gave the sanatorium a film apparatus in 1937, they had cinema once a week. The sanatorium is now shut down. In the fight against tuberculosis there was a breakthrough - it happened just after World War II. Then came effective vaccines against the disease, and a large part of the Norwegian population was vaccinated against tuberculosis in a few years. Thus was the foundation for the operation of the sanatorium gone. But others took over the buildings and between 1950 and 1990 it was used as a psychiatric hospital. After that, it was used as a reception center for refugees from the Balkan war. In 1994 the doors were closed and the sanatorium has been left abandoned since. Follow me on my website, 500px, Fluidr, Tumblr, Twitter or even Facebook and Vimeo

This Independence Hall Facts - its-been-a-while on net.photos image has 1024x1024 pixels (original) and is uploaded to . The image size is 758202 byte. If you have a problem about intellectual property, child pornography or immature images with any of these pictures, please send report email to a webmaster at , to remove it from web.