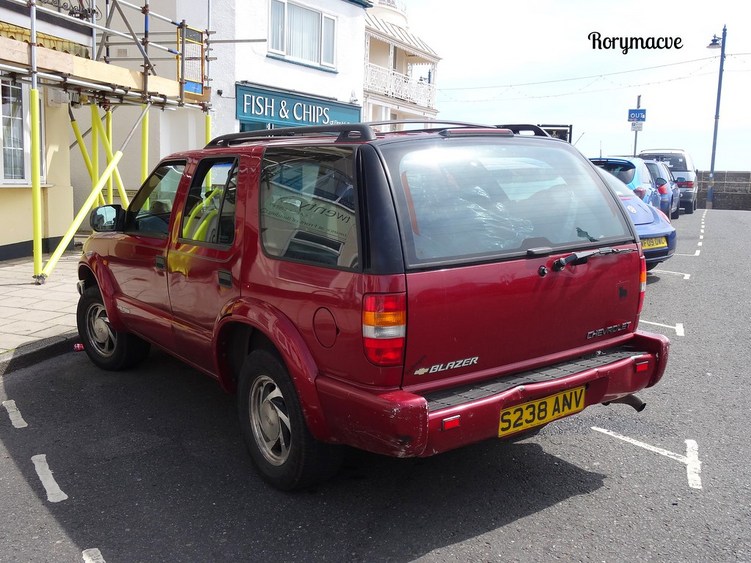 The original Chevy Blazer was developed in 1969 as the K5, a full-size pickup truck designed to conquer all terrains God ever put on the Earth, powered by the magnificent Chevrolet 350 V8 Engine. However, although a perfectly capable pickup truck, the world of SUV's was starting to emerge as a growing market thanks to the rise of the Range Rover, and thus car companies across the world developed their own versions to combat British Leyland's market monster. The result came in 1983 with the smaller version of the Blazer known as the S10, a replacement for the Isuzu based Chevy LUV of the 1970's. The S10 was based almost entirely off the K5, but without the option for a removable hard-top so it could be converted to pickup, and also came as a two door variant. At the same time the K5 was still being produced as the full-size alternative for those not bringing up a family, but instead directing several thousand head of cattle across the plains of the Midwest. The K5 would eventually end production in 1991, but would find some fame in the movie business as disposable props throughout 1980's and 1990's action films (not even joking, be it V: The Mini Series, Commando or Independence Day, all of these 80's movies feature at least one Chevy Blazer K5 getting crushed, smashed or blown up.) The S10 however was continuing to provide American families with a humble SUV that wasn't as raunchy as its competitors, largely due to emission rules that forced the car to be fitted with an engine of a certain size. The earlier versions were fitted with a 1.9L engine supplied by Isuzu, but as time went on the engine was upped to a hungry 4.3L V6 in order to compete with the Jeep Cherokee. In 1995, the all new Chevy Blazer S10 was introduced, and this is the car I remember the most. :) The 1995 Blazer was very much like the Range Rover P38 here in the UK, the 2nd generation being the best generation. The styling was revamped to make it look more sheek and 90's, and the interior was updated to provide huge amounts of comfort. Speaking from experience, the Chevy Blazer was an incredibly comfortable SUV, its velour interior like a bed that I would often drop off to sleep on when trundling across the American countryside, and the fantastic sound of a newly updated 4.6L V6 that rumbled faithfully onwards... ...right to the next petrol station. Indeed the main problem with the Chevy Blazer was that it was a very thirsty truck, and would only give you at most 15mpg. But despite it being heavy on the go-juice, it won award after award, it even won truck of the year for Playboy Magazine in 1995... ...how confusing, perhaps they're the best trucks models can drape themselves over in photoshoots... For a short period as well the S10 was available in RHD, and several examples were sold here in the UK. But sadly this endlessly reliable and lovely little truck couldn't go on forever, and in 2005 the Chevy Blazer was discontinued and replaced by the TrailBlazer, built very much upon the same principals as the previous S10, but with differing light clusters and a smoother, more streamlined body. I remember well in 2005 when Alamo rentals started using the TrailBlazer as their main rental SUV, and somehow my heart sank when I found that it was no longer the faithful truck I had come to know and love being offered. But that's not to say the TrailBlazer wasn't a bad SUV, far from it, it was just as good as the S10 in terms of trim and quality, but getting rather nostalgic, the S10 was always my childhood icon. The latest version of the TrailBlazer however is not one I'd be remembering, again a capable SUV, but the styling has sadly conformed to the trend and it's really lost all its charm. So much so that when I went to the States last time I rented a Toyota (not a bad truck, but needed Bluetooth). I digress. Either way, the good old Chevy Blazer S10 of 1995 is really to my mind my favourite SUV. I say a lot about the Range Rover P38 and its accomplishments, but as an SUV you could bring up a family with, the Chevy Blazer won me and my folks over completely as a kid, and I always promised myself when I'd grown up I'd buy myself a 1995 Chevy Blazer so that my kids could experience the same great sensations I had when I was their age.

This Independence Day Movies In Order - 1999-chevy-blazer-s10 on net.photos image has 1024x768 pixels (original) and is uploaded to . The image size is 218050 byte. If you have a problem about intellectual property, child pornography or immature images with any of these pictures, please send report email to a webmaster at , to remove it from web.