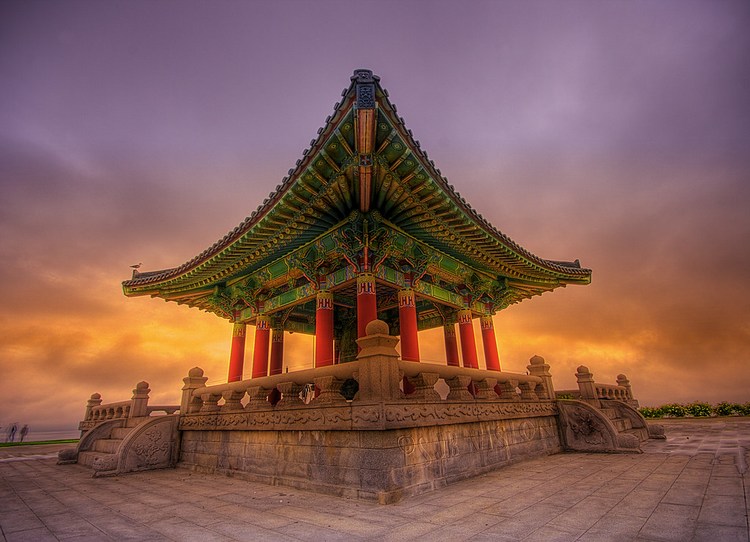 The Korean Bell of Friendship is a massive bronze bell housed in a stone pavilion in Angel's Gate Park, in the San Pedro neighborhood of Los Angeles, California. The bell was presented by the Republic of Korea to the American people to celebrate the bicentennial of the United States, to honor American veterans of the Korean War, and to symbolize friendship between the two nations. It is modeled after the Divine Bell of King Seongdeok the Great of Silla, cast in 771 for Bongdeok Temple and now located at the National Museum of Gyeongju; both are among the largest bells in the world. The bell is made of over 17 tons of copper and tin, with gold, nickel, lead, and phosphorus added to the alloy for tone quality. It has a diameter of 7½ feet, average thickness of 8 inches, and a height of 12 feet. Beginning in 2010, the bell is struck five times a year: on New Year's Eve, Korean American Day (January 13), the national independence day of the United States (Fourth of July) and Korean Liberation Day (August 15) and every September in celebration of Constitution Week. It was also rung on September 11, 2002 to commemorate the first anniversary of the September 11, 2001 terrorist attacks. The bell does not have a clapper; instead, it is sounded by striking it with a large wooden log. The Belfrey of Friendship, which houses the Korean Bell of Friendship, was featured in several scenes of the movie The Usual Suspects. Taken as part of the ON LOCATION: The Los Angeles Cultural Photo Tour sponsored by DiscoverLosAngeles.com Follow me on Facebook Please don't use this image on websites, blogs or other media without my explicit permission. © All rights reserved www.SJBVision.com

This Independence Day Movie Cast - korean-bell-of-friendship on net.photos image has 1024x740 pixels (original) and is uploaded to . The image size is 212295 byte. If you have a problem about intellectual property, child pornography or immature images with any of these pictures, please send report email to a webmaster at , to remove it from web.