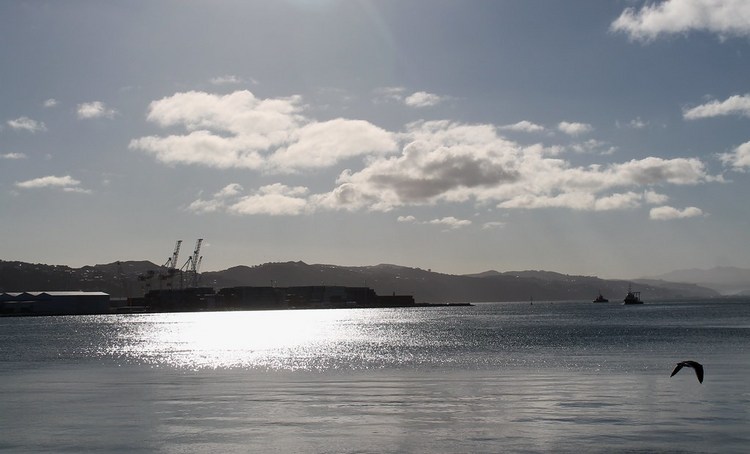 Your two friendly School Bus Drivers are back at their starting point - well almost anyway. This scene was taken from behind the Te Papa Museum looking across the harbour to the Hutt Valley (on the extreme right) and the port of Wellington! The Port is strangely quiet at the moment. Millions of dollars worth of damage was done in the big Kaikoura earthquakes back in mid-November, 2016. The big Container Cranes are off their tracks and badly damaged, and some of the Port land has subsided. The Containers that can be seen are either damaged or awaiting shipment to another Port. Unless a visiting Freighter has its own cranes (and most don't these days), they can't come into Wellington. Consequently, much of the shipping that would normally come through Wellington now has to be re-routed to Nelson (on the northern coast of the South Island), or railed or trucked to other Ports in the North Island. There are even suggestions that the Port will never fully re-open again...! But those are worries for others to be concerned about. On this particular morning, Wellington Harbour glistened beautifully in the mid-morning sun... Oh, and the two small vessels approaching? The first is a commercial fishing boat, and the second a tug; a Log Carrier had just birthed and it had its own cranes! (Left click the Mouse to view Large; click again to return to normal).

This Independence Day Movie 2016 - wellington-harbour on net.photos image has 1023x619 pixels (original) and is uploaded to . The image size is 98174 byte. If you have a problem about intellectual property, child pornography or immature images with any of these pictures, please send report email to a webmaster at , to remove it from web.