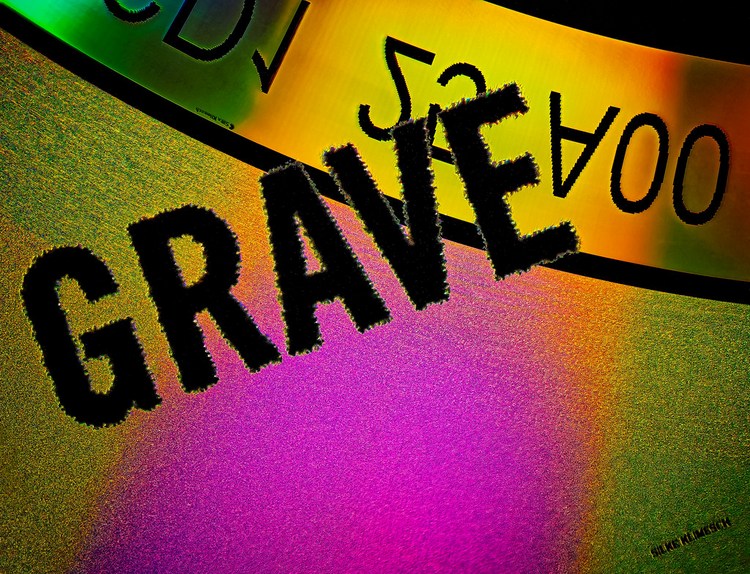 Grave Encounter Of The Close Kind

#MacroMondays #NumbersAndLetters I stream video, but I don't stream music. I don't know why. Maybe it's because I'll watch a certain movie only so and so often, with long breaks before I'll watch it again, but if it's a favourite song or record / CD, or a favourite band, I will listen to that again and again before it's another song's / band's or musician's turn. And I guess I want this to be "my" music, something that, via the recording medium, is within my space, physically. Not just bits and bytes out there in that infinite, impersonal, kind of lost world of data. Not to mention nicely made "Deluxe Editions" with interesting covers, booklets, and info which all add another aspect to the music I'm listening to. So this is a CD. My first idea was to capture the tiny info that is lasered onto the backside of a CD (the part around the hole), but all the results looked kind of boring. But then I found a CD where some of the song titles were so long that some of them were actually printed onto the part next to the CD's hole. And since that part of the CD is also translucent, I had both "letters" (from the song title), and, mirror-inverted, "numbers" and more letters from the backside of the CD in my image. I've again used the extension tubes to get nicely close to all these numbers and letters. The image is an in-camera focus stack, processed in DXO PhotoLab and Analog Efex, with a slight sharpening in Sharpen AI. HMM, Everyone, and Sing A Simple Song this week ;)

This Independence Day Movie - grave-encounter-of-the-close-kind on net.photos image has 1024x784 pixels (original) and is uploaded to . The image size is 486520 byte. If you have a problem about intellectual property, child pornography or immature images with any of these pictures, please send report email to a webmaster at , to remove it from web.