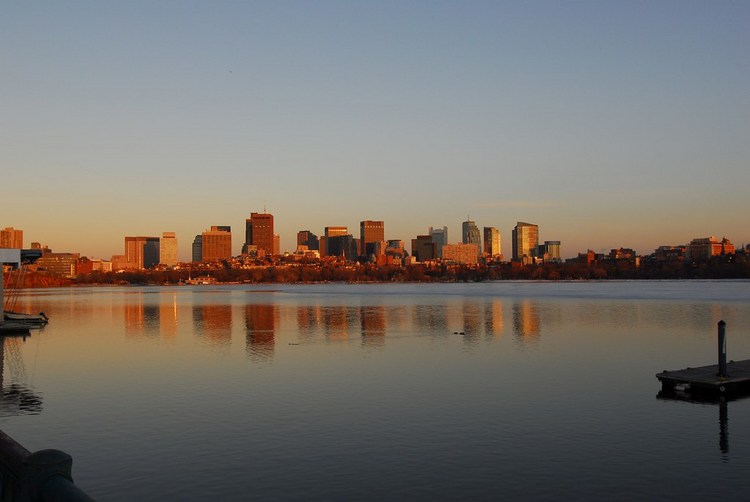 Winter 2007 Government Center/Financial District Boston, MA, USA View of the Boston Financial District/Government Center skyscrapers from across the Charles River, Memorial Drive near the Massachusetts Institute of Technology (MIT) in Cambridge. The low hilly area in front of the skyscrapers -- just at the center towards the left -- is the famous Beacon HIll area. The barren trees running from left to the right is the famous Esplanade. Visible in front of the trees is the Boston Community Boathouse (that is the name, I think). The Esplanade is a favorite jogging area, playground and for other purposes during the day and at night all year round. During the summer, the Hatch Shell area (hidden by the trees near the Beacon Hill area) is the center of free summer concerts and movie shows. Among the famous residents here is the Boston Pops Orchestra that used to perform quite a number of concerts that culminate with the 4th of July Concert and Fireworks extravaganza. The Charles River at the time would be teeming with yatchs and small boats, while both all sides of the Charles River completed as a "circle" by the Longefellow Bridge and the Harvard Bridge would be teeming with Independence Day revellers, estimated usually to number about half a million. Once, the Beacon Hill was really a hill. However, its top was lopped off at some point to fill up the banks of the Charles River which used to be more than a mile wide (about 1.6miles, if I am not mistaken) in the area shown here. Most of the landfill however came from another part of Massachusetts (I forgot what place it was already). The result of this landfill reclamation would be the current Memorial Drive area as well as the land now occupied partly by the Massachusetts Institute of Technology (MIT) campus in the Cambridge side and the Esplanade, Storrow Drive and the Backbay area. Just after the skyscrapers shown here is the Boston Harbor, so that the (water) area shown here was once the "back of the bay" so that the land fill area retained its current name, the Backbay -- shown at night in WinterNight 2007: Boston CityScape. N.B. Except for the use of "unsharp image" and the automated resizing and "screen image optimization" to reduce the diskspace usage, no further image manipulation was done.

This Independence Day Movie - boston-winter-cityscape-just-before-sundown on net.photos image has 1023x685 pixels (original) and is uploaded to . The image size is 78183 byte. If you have a problem about intellectual property, child pornography or immature images with any of these pictures, please send report email to a webmaster at , to remove it from web.