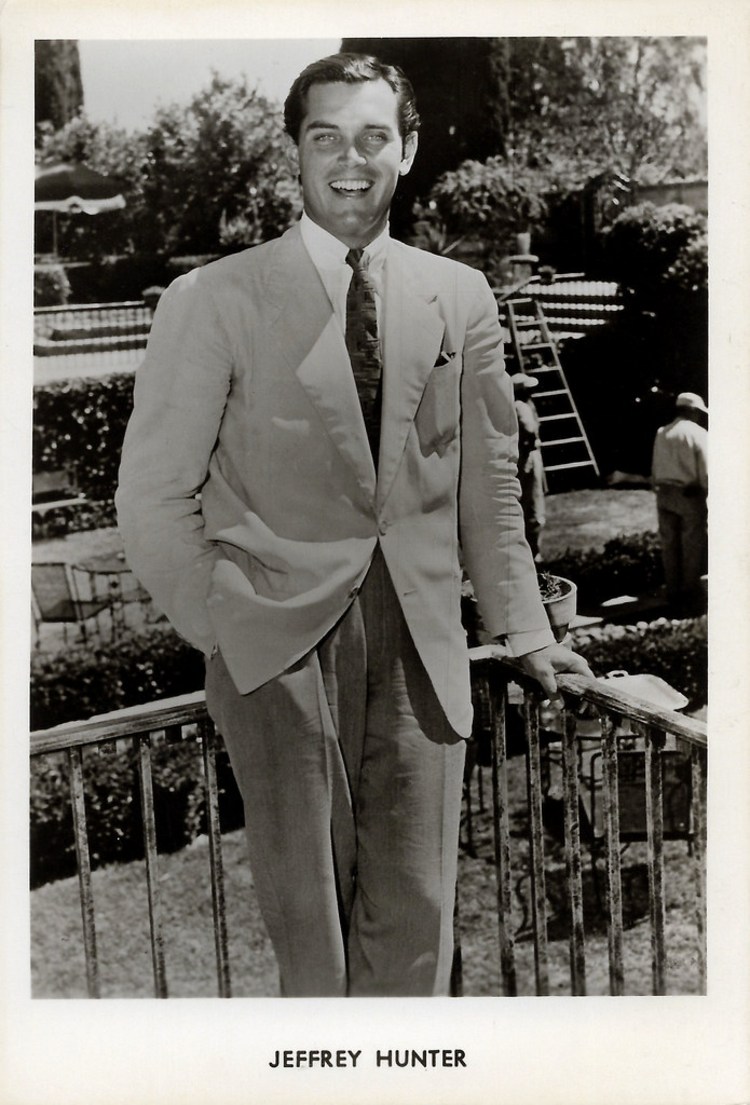 Belgian postcard, no. 5359. American actor Jeffrey Hunter (1926-1969) was the tall, blue-eyed, and impossibly good-looking heartthrob of many Hollywood films of the 1950s. During the 1960s, he also worked in European cinema. Jeffrey Hunter was born Henry Herman McKinnies Jr. in 1926 in New Orleans, Louisiana, an only child. His parents met at the University of Arkansas, and when he was almost four his family moved to Milwaukee, Wisconsin. In his teens, he acted in productions of the North Shore Children's Theater, and from 1942 to 1944 performed in summer stock with the local Port Players, along with Eileen Heckart, Charlotte Rae, and Morton DaCosta, and was a radio actor at WTMJ, getting his first professional paycheck in 1945 for the wartime series Those Who Serve. After graduation from Whitefish Bay High School, where he was co-captain of the football team, he enlisted in the United States Navy and underwent training at Great Lakes Naval Station, Illinois, in 1945-1946. However, on the eve of his transfer to duty in Japan, he took ill and received a medical discharge from the service. Hunter attended and graduated from Northwestern University in Illinois with a bachelor's degree in 1949, where he acquired more stage experience in Sheridan's The Rivals and Ruth Gordon's Years Ago. He also did summer stock with Northwestern students at Eagles Mere, Pennsylvania in 1948, worked on two Northwestern Radio Playshop broadcasts, was president of Phi Delta Theta Fraternity, and was active in the campus film society with David Bradley, later acting in Bradley's production of Julius Caesar (1950). He went to graduate school at the University of California, Los Angeles, where he studied radio and drama. He was in the cast of a UCLA production of All My Sons in May 1950, and on opening night talent scouts for Paramount and 20th Century Fox in the audience zeroed in on the tall, blue-eyed, and impossibly good-looking Hunter. Jeffrey Hunter made a screen test with Ed Begley in a scene from All My Sons at Paramount where he met Barbara Rush, his future wife. An executive shake-up at that studio derailed his hiring, but in 1950, 20th Century-Fox head Darryl F. Zanuck signed him to a contract and changed his name from Henry Herman McKinnies Jr to Jeffrey Hunter. He was almost immediately sent on location in New York for Fourteen Hours (Henry Hathaway, 1951) with Richard Basehart. Hunter was kept fairly busy in pictures, working his way from featured roles to starring roles to first billing within two years in the British film Single-Handed (Roy Boulting, 1953). His big break came with The Searchers (John Ford, 1956), where he played the young cowboy who accompanies John Wayne on his search for a child kidnapped by Comanches. Hunter got excellent reviews for his performance in this film and justifiably so, as he held his own well with the veteran Wayne. Starring roles in two more John Ford movies followed, and in 1960 Hunter had one of his best roles in Hell to Eternity (Phil Karlson, 1960), the true story of World War II hero Guy Gabaldon. That same year, Hunter landed the role for which he is probably best known (although it's far from his best work) when he played the Son of God in King of Kings (Nicholas Ray, 1961). After the cancellation of his Western series Temple Houston (1963) his career took a downturn. He was cast as Christopher Pike, captain of the USS Enterprise, in the original Star Trek pilot in 1964. However, when an undecided NBC requested a second pilot in early 1965, Hunter declined, having decided to concentrate on his film career, instead. He worked in Italy where he starred in Oro per i Cesari/Gold for the Caesars (André De Toth, Sabatino Ciuffini, 1963) and the Spaghetti Western Joe... cercati un posto per morire!/Find a Place to Die! ( Giuliano Carnimeo, 1968). In 1969, Hunter suffered a stroke (after just recovering from an earlier stroke), took a bad fall, and underwent emergency surgery, but died from complications of both the fall and the surgery. Sources: Pedro Borges (IMDb) and IMDb. And, please check out our blog European Film Star Postcards.

This Independence Day Cast President - jeffrey-hunter on net.photos image has 695x1024 pixels (original) and is uploaded to . The image size is 175699 byte. If you have a problem about intellectual property, child pornography or immature images with any of these pictures, please send report email to a webmaster at , to remove it from web.