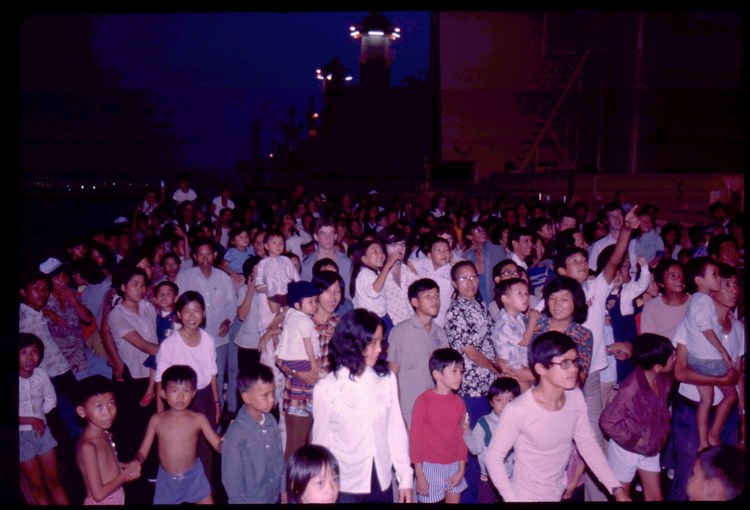 Wellpark - the story of a rescue

PART 5: October 10th was a special day. Not only was it my father’s birthday, but it was also Taiwan’s Independence day. We tried to create a bit of a carnival effect and hung up every available flag on the ship. It added a bit of gaiety to the pattern of life which in the last few days had been a bit stagnant for the Vietnamese adults. With no news on their future and the uncomfortable and restricted living conditions we were all beginning to wonder how long we could be left in limbo. As the cargo continued to be extracted from the ship’s holds, some detected more activity at ‘management level’. The development came later in the day. It hadn’t taken long after the rescue for Wellpark’s owners to contact Britain’s Foreign Office and Government with their own call for help. Wellpark was one of the first ships to encounter the new phenomena of ‘Vietnamese Boat People’. The world’s nations had no international policies on how to deal with large numbers of people either fleeing or being forced to leave a country who found refuge on a ship in neutral international waters. For the last eight days ministers and other civil servants in Britain’s government had been made aware of a British ship which had sailed into this new political problem. Unknown to us, already, at the highest Government level they had debated and cast aside Britain’s strict immigration policy. They had also allocated accommodation, located and chartered two airliners to take Wellpark’s refugees to London, and put in place all that was necessary to give 346 homeless people a new start in life. It must have been at about 10.00am in London that everything was sanctioned and the Home Secretary agreed to release the news. There was an announcement over the tannoy. Everyone should assemble on the main deck. There was some nervousness and anticipation as the crowd gathered. The children were gathered in close to their parents and we stood to one side unsure of what the news might be. Nothing could be taken for granted, and just as much as there was positive hope, there was concern for the worst, which might mean indefinite internment with miserable living conditions, or worst of all, repatriation. The Captain appeared, megaphone in his hands, with his Vietnamese Committee around him. As they stood up on the poop deck facing out over the crowd below, he passed the megaphone to one of the committee members and intimated for him to go ahead with the announcement. He spoke in Vietnamese and only spoke briefly before there were gasps of delight. Some cheered and some clapped their hands. There was laughter and excited chatter. A few hugged each other. As English speakers only, we had no idea what the message was but it wasn’t hard to conclude it could only be good news. Eagerly we turned to the nearest Vietnamese asking them to explain: ‘England!’ was the reply, ‘We’re going to England!’. Our mouths must have hung open in amazement. In our eyes this was the best possible news, and we were immensely proud that our country had backed up our actions in this way. We should have had some fireworks to celebrate with but that night, as we chatted with the Vietnamese on deck the sky was lit with the smiles on their faces. Whilst the Captain spent the night answering news reporters questions on the phone we sat talking with the refugees long in to the night. They asked so many questions about life in Britain, about the Queen and the Royal Family, about schools and work and in particular, what the weather and food was like! And they asked where we lived and what it was like there and whether they would be able to see us again. We were thrilled at the prospect. Back in Britain for the first time, Denholm company management phoned every crew member’s next of kin to tell them what had happened in the South China Sea ten days earlier. They told them it would be in the news. And it was. Next day the Wellpark story was the leading front page story in all the national newspapers. Other chapters of this story are here: PART A www.flickr.com/photos/pentlandpirate/1438584566/in/set-72... PART 1 www.flickr.com/photos/pentlandpirate/1436299943/in/set-72... PART 2 www.flickr.com/photos/pentlandpirate/1437528215/in/set-72... PART 3 www.flickr.com/photos/pentlandpirate/1461744696/in/set-72... PART 4 www.flickr.com/photos/pentlandpirate/1460893557/in/set-72... PART 6 www.flickr.com/photos/pentlandpirate/1438381480/in/set-72... You can also join the Wellpark Reunion site here : wellparkreunion.ning.com/main/authorization/signIn?target...

This Independence Day Cast And Crew - wellpark-the-story-of-a-rescue on net.photos image has 1024x697 pixels (original) and is uploaded to . The image size is 130440 byte. If you have a problem about intellectual property, child pornography or immature images with any of these pictures, please send report email to a webmaster at , to remove it from web.