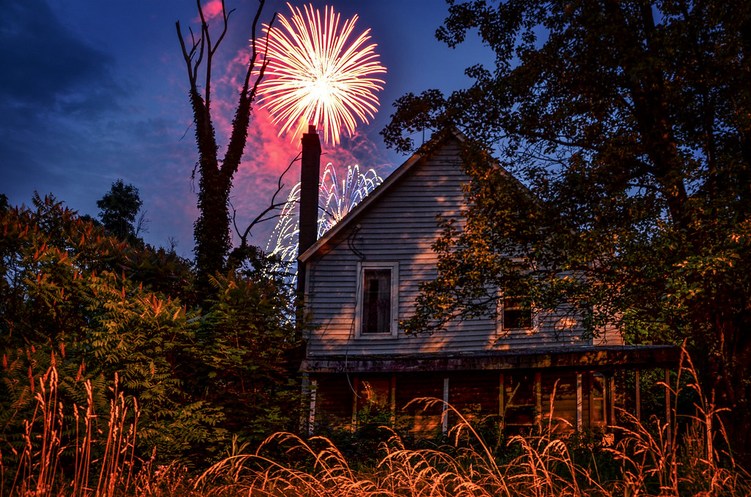 Had all but decided to forego the local fireworks show this year. Felt as if I had done all I could do creatively over the years in terms of photography of these events. And lately I'm avoiding situations that cause me to feel that I'm simply going through the motions. That said, fireworks are irresistible and this opportunity comes around only once a year here in the village. As I gathered up the camera and tripod, I had the inspiration to use a long abandoned house as my foreground...two of my favorite things in a single frame! I worked out the details in my head as I walked toward the venue. The geometry was perfect with the front of the house aligned perfectly with the fireworks launch point. I had photographed this place last December (linked below) and it looked as lonely as ever. Tall weeds formed a perfect foreground element. A sodium streetlight behind me cast a ghastly orange glow adding to the surreal effect. I could hear people, many people, off in the distance, but was completely alone here in front of the house. I setup the camera just as the first rockets exploded overhead. The thrill factor was enormous. Being here somehow made the show seem even grander than it was. It was that compounding effect I've felt before over having discovered something that no one else had, and being able to capture it with the camera. Best fireworks show ever! Camera Tech: didn't realize until last evening that you need to turn off the long exposure noise reduction setting for fireworks photos. That setting works fine, however it doubles the time required to take a photo. You just haven't got that kind of time to waste during a show like this. I captured many more shots during this show, and there really wasn't that much noise anyway. Keep the ISO on the low side, or else noise will be a problem. Aperture near f8 and exposure time ranging between 8 and 15 seconds worked well for me. Much longer than that and the fireworks tend to be overexposed and you lose the definition of the light trails as they tend to go all fuzzy. Try to compose shots with the camera facing opposite the direction of sunset as you might end up with too bright of a sky. There's considerable light in the sky here now well past 10pm.

This Independence Day Cast - rocket-science on net.photos image has 1024x678 pixels (original) and is uploaded to . The image size is 363168 byte. If you have a problem about intellectual property, child pornography or immature images with any of these pictures, please send report email to a webmaster at , to remove it from web.