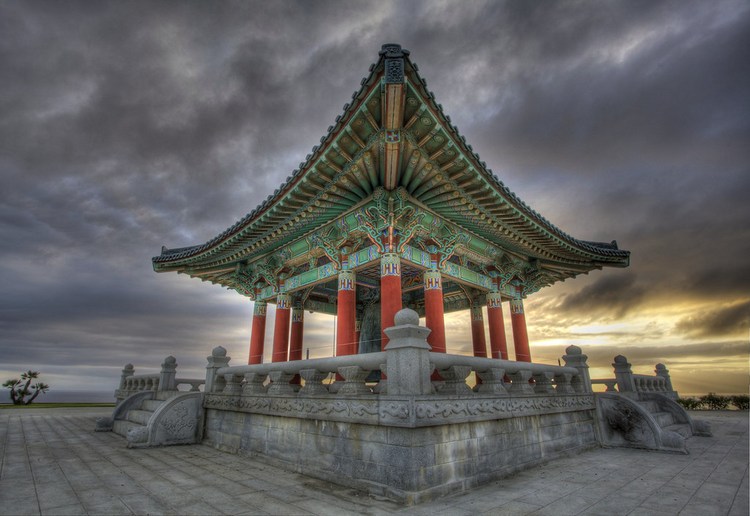 5DMKII + 17-40mm, f/9, ISO 50 (3 Exposures) Toned with Photomatix Korean Bell of Friendship and Bell Pavilion I have been wanting to shoot this for a while. Went one afternoon with clear blue skies, just didn't do it for me. So I have been waiting for a day like today! Wanted a little bit of commotion behind such a peaceful subject. With the storm rolling into Los Angeles, I think I captured that.. Here is some info on the Pavilion: This massive and intricately-decorated bell and pavilion was donated in 1976 to the people of Los Angeles by the people of the Republic of Korea to celebrate the bicentennial of the U.S. independence, honor veterans of the Korean War, and to consolidate traditional friendship between the two countries. The bell is patterned after the Bronze Bell of King Songdok, which was cast in 771 A.D. and is still on view in South Korea today. The bell was cast in Korea and shipped to the United States. Weighing 17 tons, with a height of twelve feet and a diameter of 7-1/2 feet, the bell is made of copper and tin, with gold, nickel, lead and phosphorous added for tone quality. When it was built, it cost the Korean people $500,000. Four pairs of figures, each pair consisting of the Goddess of Liberty holding a torch, and a Korean spirit , are engraved in relief on the body of the bell. Each of the Korean spirits holds up a different symbol: a symbolic design of the Korean flag; a branch of the rose of Sharon, Korea's national flower; a branch of laurel, symbol of victory; and a dove of peace. The bell has no clapper but is struck from the outside with a wooden log. The bell is set in a pagoda-like stone structure which was constructed on the site by thirty craftsmen flown in from Korea. It took them ten months and costs $569,680. The pavilion is supported by twelve columns representing the twelve designs of the Oriental zodiac. Animals stand guard at the base of each column. Resting peacefully on the knoll overlooking the sea gate from which U.S. troops sailed into the Pacific, the bell site affords an unsurpassed view of the Los Angeles harbor, the Catalina Channel and the sea terraces of San Pedro hill. The bell is rung only four times each year: the Fourth of July, August 15 (Korean Independence Day) and New Year's Eve, and every September to coincide with bell ringings around the country to celebrate Constitution week.

This Independence Day Cast - friendship on net.photos image has 1024x705 pixels (original) and is uploaded to . The image size is 172588 byte. If you have a problem about intellectual property, child pornography or immature images with any of these pictures, please send report email to a webmaster at , to remove it from web.