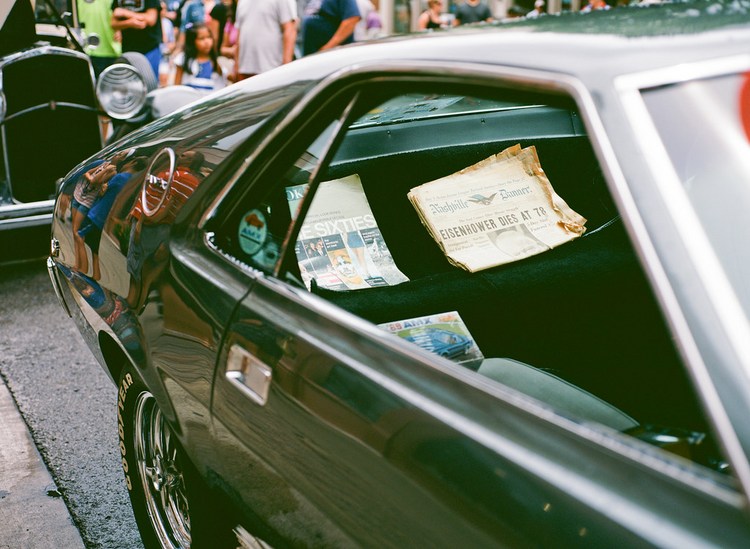 This image is a shot from my very first roll of Kodak Ektar 100. I wanted to experiment with a more saturated color film. After some research and some reservations, I decided to try it out. I have heard that this film should be treated like a slide film. In other words, you need to nail the exposure. I read that it brings out the red in fair skin and that it can leave a blue cast if the exposure is off. I also heard that it needs a lot of light. Sunny days are best. Despite these negatives, pun intended, I ran a roll through my Mamiya 645 1000S. I have to say that either I got lucky or I did something right, because I really dig the results. I must confess that I have a professional lab as part of my work flow. The guys and gals at the Film Box Lab in Nashville know what they are doing. Now what would be the perfect subject for my first roll of Ektar 100? Why not the red, white and blue festivities of the 4th of July! Check out my blog post about the Franklin on the Fourth Festival shot on Ektar. Here is the blog link: www.shutteringthrulife.com/ektars-red-white-blue/ The other 14 shots are on the blog. I will be posting more shots here on Flickr later. Please leave me your thoughts on the photos and your experiences with this film. It would be greatly appreciated. Mamiya 645 1000s Mamiya Sekor C 80mm f2.8 Kodak Ektar 100 Lab: Film Box – Nashville, Tennessee Website / Blog: Shuttering Thru Life 500px

This Independence Day Cast - a-different-time on net.photos image has 1024x750 pixels (original) and is uploaded to . The image size is 221997 byte. If you have a problem about intellectual property, child pornography or immature images with any of these pictures, please send report email to a webmaster at , to remove it from web.