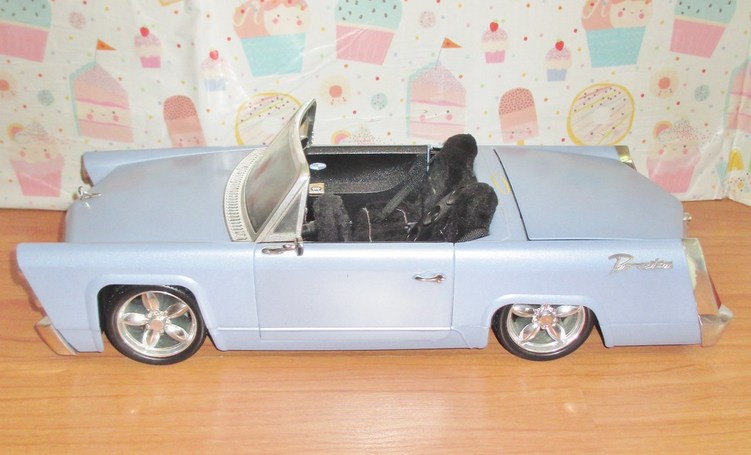 Box Date: 2002 Condition Purchased: used Missing Items: 2 sodas, 2 water bottles, cellphone, hanging disco ball, 2 shopping bags Important Notes: Some cruisers were also sold with a variety of repackaged dolls, such as "1st Edition" Cloe and the Flaunt it! dolls. This car plays the radio and has headlights that really work. Personal Fun Fact: There are many iconic pieces of Bratz furniture that I'd love to own. But none are more signature Bratz to me than this F.M. Cruiser. It reminds me so fondly of the 2002 Christmas Toys 'R' Us catalogue. I recall flipping greedily through that Toys 'R' Us catalogue and stopping dead in my tracks at the Bratz spread. Xpress It! Meygan was advertised in this F.M. Cruiser. I knew from that moment on that I HAD to get Meygan for Christmas that year. In fact, I picked her over Cloe...in part because of this car. Naturally, I always fantasized about having the F.M. Cruiser too. I even imagined that it was the vehicle that Meygan drove in our doll games. Normally, I wasn't that keen on doll vehicles, unless they were campers or vans. I liked campers because they could function as a house, and I enjoyed vans because I liked having a large doll family. Other than that, I had little interest in dolly cars, until this F.M. Cruiser came out. However, it would be quite literally ten years before I got my hands on my very own F.M. Cruiser. The first I saw at an indoor flea market we used to frequent with Dad. It was sometime in 2012, not long after he'd passed away. Colleen and I decided to go one weekend. It was there that I found an overpriced, very gutted F.M. Cruiser. It was missing the seats, seat/steering wheel covers, and had broken mirrors. But the flame decal was still on the side! I admit, I overpaid for this pathetic excuse for a F.M. Cruiser...I think it was around $8. I used it as my Punkz Eitan's car in our photo skits. To this day, I still consider it Eitan's car, and it makes appearances in video skits. It just wasn't nice enough to be my Xpress It! Meygan's car, you know? Obviously my first F.M. Cruiser is not the one I chose to photograph. This is my second one, that I got in 2014. Ironically, it was cheaper than my first. This one cost just $5....so unbelievable! I remember the seller at our regular flea market told me it belonged to his sister. She took excellent care of her dollies. This car was complete with all it's fabulous seat covers, and it still worked! I had no idea how lush this F.M. Cruiser was until I got this one. Seriously, the seat covers, the cup holders, the mirrors, the sheer weight of the car...it's all insanely impressive. Dad would have LOVED this F.M. Cruiser--he was a huge toy car buff. In fact, we used to "fight" over my Rock Angelz car. I think he would have loved this one even more because it's not obviously Bratz branded. Knowing how much my dad would have adored this F.M. Cruiser makes it mean even more to me.

This Independence Day 2021 How Many Years - 2002-bratz-f-m-cruiser on net.photos image has 1023x620 pixels (original) and is uploaded to . The image size is 109566 byte. If you have a problem about intellectual property, child pornography or immature images with any of these pictures, please send report email to a webmaster at , to remove it from web.